Our trip to California came to an end, and we began our journey back to Colorado. Our journey across the Mojave Desert was uneventful, and by evening we found ourselves back in Cedar City, Utah, and snow-covered slopes. We enjoyed our overnight in Cedar City (nice vibe to it) and had a short hop the next morning to my favorite (in the top 5) locale – Moab, Utah. Moab has some of the most magical landscapes on the planet; especially during the off-season when the town is dead quiet. Following are some pics of this fantasy land.

We enjoyed the early morning along the Wallstreet climbing area, Potash Road, Utah.

The sandstone cliffs reflect off of the surface of a cold Colorado River.

The Colorado River visits a labyrinth of sandstone canyons while on its journey to the sea.

That's it for now; I'm not sure what's up next. Thanks for reading!

California IV
Our California trip was rapidly coming to an end. We visited Morro Bay again for an hour or so before heading back to Bakersfield and beyond. We found the beach and waves to be full of surfers. The coastal waters between Point Buchon (south of Morro Bay) and Point Estero (north of Morro Bay) apparently host a fair number of Great White Sharks. This link illustrates what happens when Morro Bay surfers sight one. Despite being land-locked, I'm a strong swimmer and I can assure you I would have been the first one back on shore.

Dude, the next one has your name on it.

He makes it look easy! 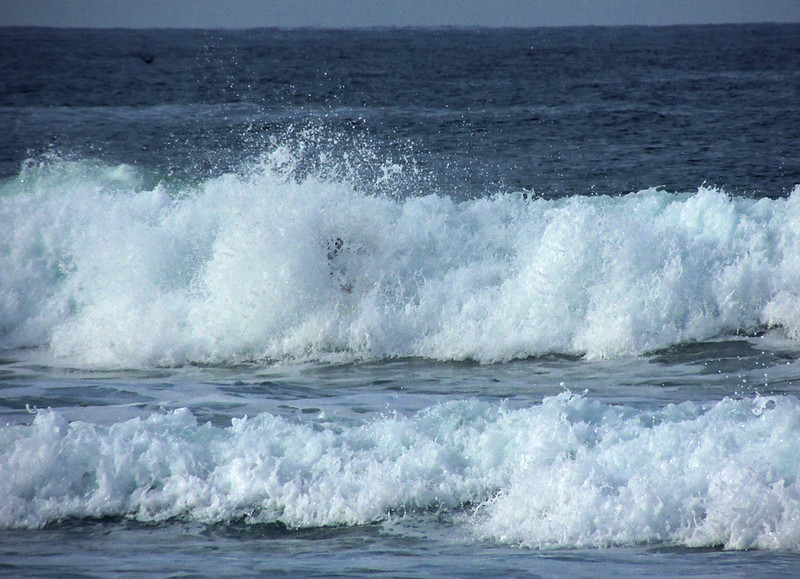 I would love to try surfing, but I don't like fish larger than me hanging out in the vicinity.

Well, that's it for sunny California. Ancient sandstone of Utah is next on the docket.
Adios
Posted by Lee Zard at 12:30 AM 1 comment:

Following is another photo set of coastal Cambria, California. The coastline of the Fiscalini Ranch Preserve turned out to be a fairly good place to watch the sun fall into the sea. Earlier in the evening we enjoyed watching a grey whale, or perhaps an orca, blow air and water out of its blowhole (regretfully, no photos). We saw the spout, but couldn't tell what type of seafaring resident it was. Enjoy...

Cormorants (plus a gull)

Our day on the coast ended all too soon. Stay tuned though, I have one more photo set from the coast...

Our journey continues. After arriving in Morro Bay, we spent the morning and early afternoon playing in the shadow of Morro Rock. I'm normally landlocked, so visiting the ocean is like visiting another planet. Morro Rock proper is a 23-million-year old slowly decaying volcanic plug. The rock also is a sacred site to the indigenous Salinan and Chumash tribes.

On the water front, Morro Bay is a natural sub-bay of much larger Estero Bay. Morro Bay harbor was built by the US Army Corps of Engineers. Morro harbor is the only all-weather small craft commercial and recreational harbor between Santa Barbara and Monterey, California.

Wildlife is plentiful with 3 species of cormorant, 2 species of gull and Peregrine falcons on Morro Rock. The latter is protected. Hence, no climbing. Too bad, I wanted so much to hike to the top. Other local creatures include sea lions, seals and sea otters. Tide pool residents are abundant as well.

We got to see a tall ship position itself to make its way into the small harbor. I didn't realize it until after we returned home that a Tall Ship Festival had been scheduled to begin the day after our arrival on the coast, December 2nd. The festival ran through December 7th. Perhaps I should do better homework the next time we visit.

I don't know much of anything about an ocean's surf. Nonetheless the waves seemed large today. This turned out to be a correct assumption as big waves were locally forecast. This may explain an absence of surfers. Although, I thought surfers would like big waves; the larger surf being analogous to a powder day skiing. The mystery of the day I guess.

After lunch we headed north to the coastal hamlet of Cambria. The coastline is a bit more wild and wooly here. We stayed in this area until the sun had sunk beneath the horizon.

That's it for this set. There's more California coast to come. Thanks for reading.
Adios
Posted by Lee Zard at 12:30 AM 4 comments:

California I
Hi all, gobble, gobble, gobble... I just returned from 10 days out west. Every other year or so, Snowcatcher and I try to visit her parents for Thanksgiving, as well as spend a day or two on the beach.

Thanksgiving Day found us leaving the Denver area on shear ice. As we proceeded higher into the mountains, conditions turned from ice to easier-to-pilot snow. From the Vail Ski Area to our first stop for family and food, dry conditions prevailed.

The next day, following an early morning communion with a mountain biking velociraptor in Fruita, Colorado, we found ourselves traversing central Utah in somewhat slick conditions again.

By the time we reached Cedar City, Utah, 8 inches of fresh snow had accumulated.

The storm was short-lived, and the 4,245-foot loss of elevation (over the course of 90 miles) down onto the Mojave Desert between Cedar City and Mesquite, Nevada, went quickly. Give or take 454 miles and 6.75 hours later, we found ourselves rolling into Bakersfield, California, at the southern end of the San Joaquin Valley, our primary destination. We managed to sneak away for two days to the coast. Starting at Morro Bay, we worked our way north to Cambria.