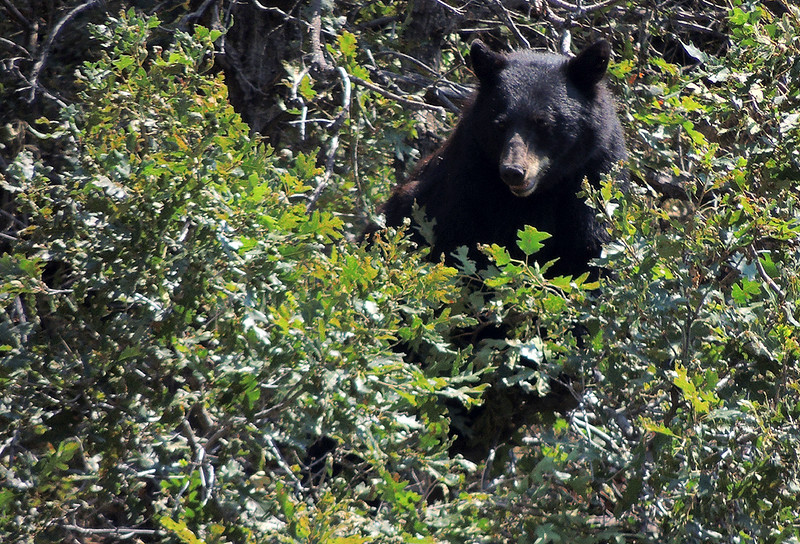 Bears
The dog days of summer have wound down. Evenings are starting to cool a bit. It's conceivable we may have our first snow within a month. Our mountains can get snow at any time now. Montana has already had it! Early fall is in the air, and my favorite months of September and October are on the horizon. I like the colors, mountain biking, bugling elk and climbing high peaks in cooler weather with less lightning.

As we speak, Front Range bears are in full-on feasting mode to put on fat for the winter; at times they seem not too concerned about being observed. They have been slamming acorns, et cetera, for about two weeks now. Some mountain bike forays are in my favor. The following was one of those days when I enjoyed watching a black bear sow and her cubs. I had actually been watching them for several days and finally took a camera that could zoom in a bit more than my point and shoot. Enjoy momma and her cubs. 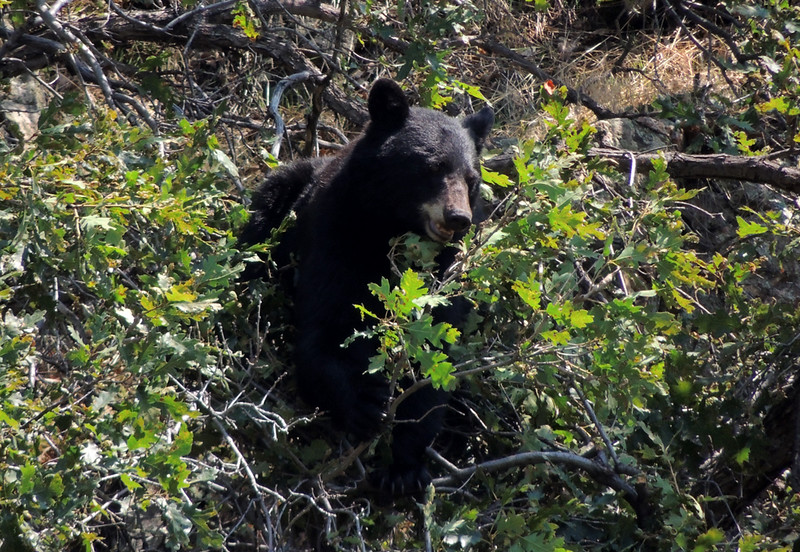 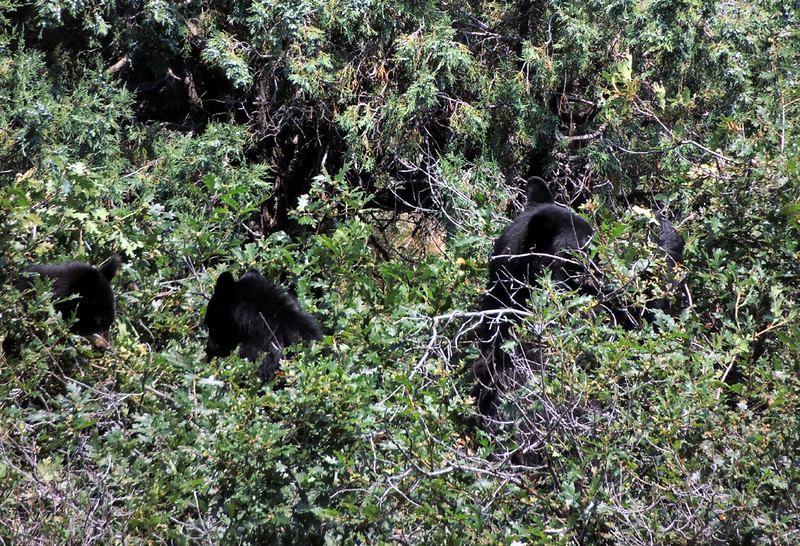 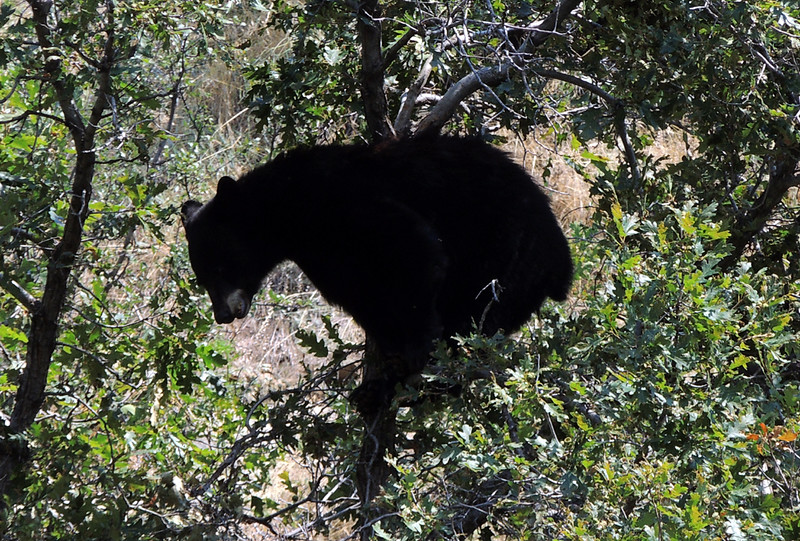 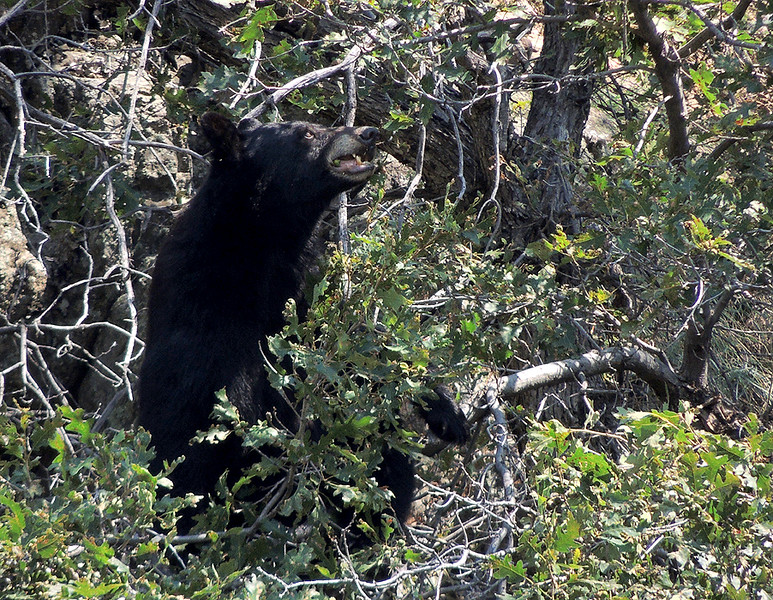 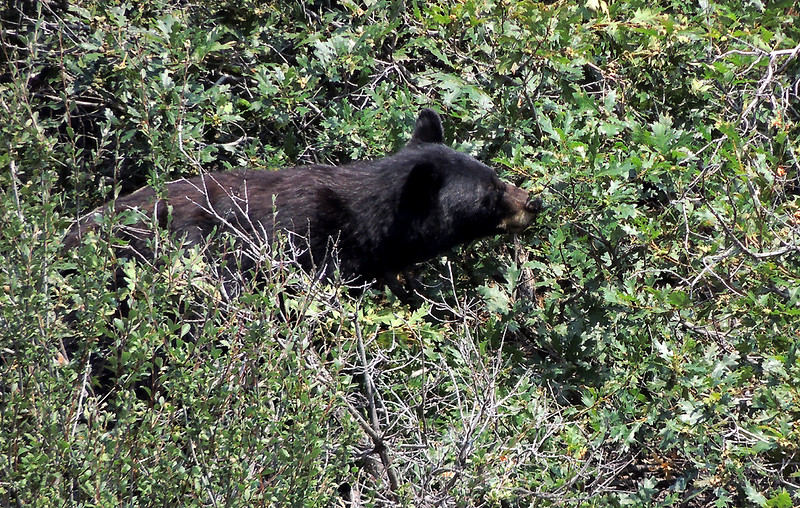 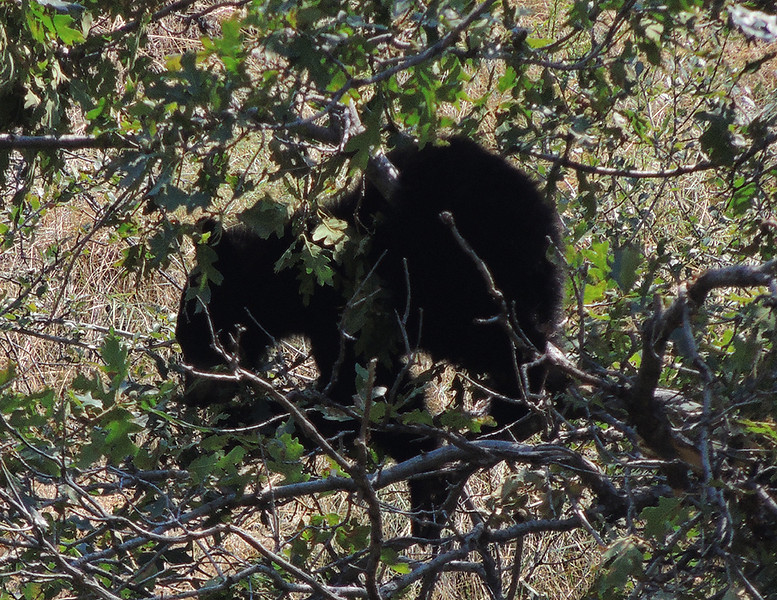 Stay tuned. Things will pick up again with the fall season.

Back To The Jungle
Our final day was bittersweet. Bitter, in that I'm not a very good city boy and I didn't want to go back home. Sweet, in that we had the opportunity to spend a handful of days in utopia.

Our route home took us to Taylor Reservoir; from here we took a side-trip to the occupied, late-1800s town of Tin Cup. From Tin Cup we visited Mirror Lake at the foot of the southern Sawatch Mountains. Mirror Lake was our final stop before heading back over the divide via 12,126-foot Cottonwood Pass. Hope you enjoyed tagging along with us on our trip. Below are a few more pics.

Taylor River and Taylor Reservoir are known for larger-than-life fishing.

Morning mist started lifting above the reservoir about the time we drove in.

Ever so slowly, the Sawatch Range came into view. 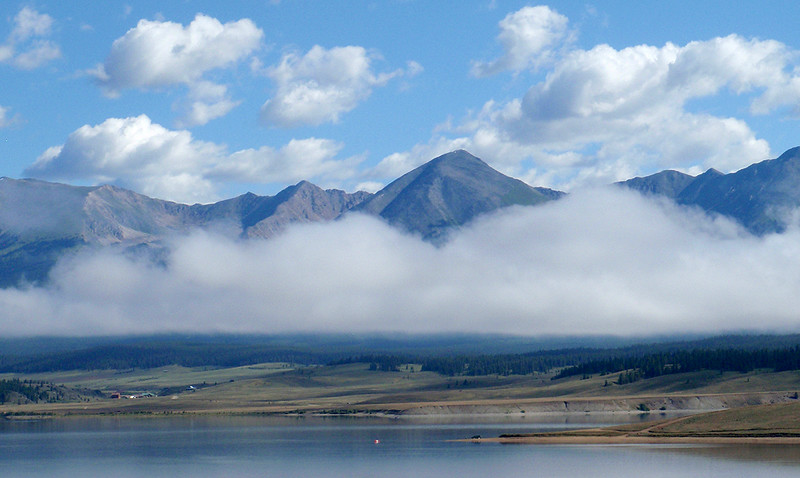 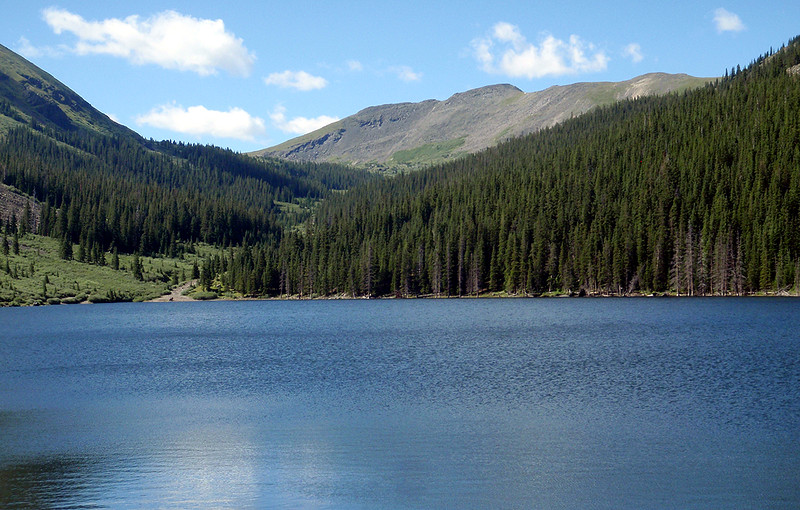 12,890-foot Red Mountain Number 3 rises high above Red Mountain Pass. Just for fun, the inverse of this pic may be found here. My shot location is from the highway in the lower left just before the big u-shape switchback (disregard seasons obviously).
Silverton Vicinity
We left Yankee Boy Basin around noon. Our next stop for the day would be Mineral Creek, northwest of Silverton, Colorado. Silverton is a small community surrounded by alpine majesty. Its heritage has primarily been mining. Yes, this is the Silverton that made national news about flooding the Animas River with heavy metals from a mine being tinkered with by the EPA. Currently, the town is host to trinkets and souvenirs, 4-wheeling, backcountry skiing and the turnaround depot for the Durango and Silverton Narrow Gauge Railroad out of Durango.

Only one year-round highway provides access to Silverton. During the winter months, it's not uncommon for Silverton to be snowed in with no physical access because avalanches have closed Highway 550 on the north and south sides of town. Many of the slide-paths have names. During the summer months, 4x4 access from Lake City is possible over Engineer Pass and Cinnamon Pass. Similarly, summer 4x4-access to and from Telluride is possible over Ophir Pass, as is one-way to Telluride over Black Bear Pass (a very dangerous 4x4 route).

Off we go! The Yankee Boy Basin shelf road is always fun! This road is a good bike ride too; it entails a bit of huffing and puffing.

Above this point, the road becomes much steeper and rougher rather quickly.

Mineral Creek flows beneath the long east ridge of 13,761-foot Fuller Peak. On the other side of this ridge, Ice Lake Basin is suspended in awesomeness! It's probably one of the most beautiful basins in the San Juan Mountains. Snowcatcher has some beautiful photography from Ice Lake Basin. We had planned to return to Ice Lake this trip but were hampered by lightning.

Red Mountain Number 1 (12,592 ft) ended Day Three. (Exciting official USGS 7.5 minute map names – no?) We pointed the nose north and took off toward the Gunnison River Valley. We hoped to reach Blue Mesa Reservoir by sunset. After collecting petrol and pizza in Montrose, Colorado, we arrived at the reservoir a tad before sunset. 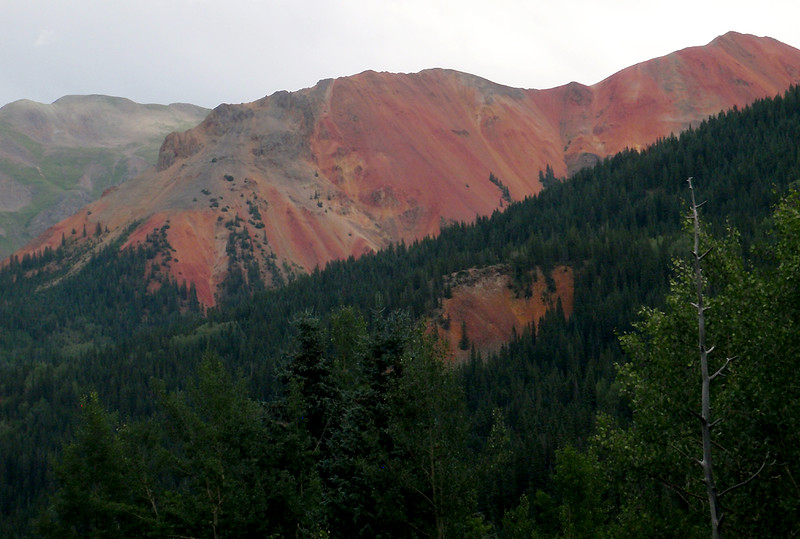 Our final day would take us up through the Taylor Park area into the southern Sawatch Mountains. Stay tuned.
Adios
Posted by Lee Zard at 12:30 AM 1 comment:

Yankee Boy Basin Part II
Welcome back. We're still on wildflower patrol high in the northern San Juan Mountains of southwest Colorado. We couldn't get enough of scenic Yankee Boy Basin. Colorado's state flower, the Blue Columbine, was prolific, as was the Larkspur.

The final 3/4 mile of 4x4-access to upper Yankee Boy Basin is not a difficult drive. However, it is slow, steep and narrow; it is very eroded and washed-out in places; it requires descent ground clearance in areas. Longer vehicles may drag their hitches while navigating water bars and stream crossings. Lastly, people tend to park their non-clearance vehicles in small passing pullouts (common sense no longer exists). 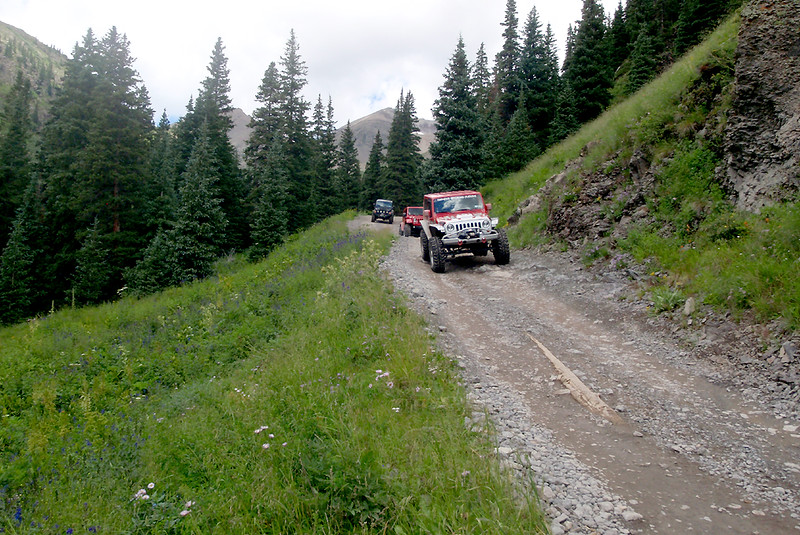 More mountains on the docket; they'll be up soon.
Adios
Posted by Lee Zard at 12:30 AM 1 comment:

Day Three of our wildflower fest found us in four-wheel drive wrou, wrou, wrouing up to phenomenal Yankee Boy Basin. The only downfall: it's a very busy basin full of 4x4s crawling toward thinner atmosphere. Words don't really describe the flowers here. This is one of the few alpine regions capable of giving the wildflowers of the Crested Butte area a run for their money. When Yankee Boy Basin flowers are at peak, it's amazing. We hit it very close to peak

The alpine tundra and sentinel peaks are not bad on the eyes either. I think the San Juan Mountains are Colorado's finest alpine peaks; Yankee Boy Basin touches only a tip of them. Enjoy the pics.

As we inched up the mountain side, views began to open up. In the far upper left, the summit block of Mount Sneffels (14,150 ft, rank #27) is just visible. The peak in the upper left is Kismet (13,694 ft, no rank). The upper right peak is Cirque Mountain (13,686 ft, rank #155). Cirque actually has two summits. Note: Kismet is not ranked because its connecting saddle with Mount Sneffels has less than 300-foot drop in elevation. Kismet has what is known as a soft rank.

The high saddle between Teakettle Mountain (13,819 ft, rank #98) and Potosi Peak (13,786 ft, rank #113) is more difficult to reach than it looks. The rock up high is loose and often resting at the angle of repose. However, sometimes the rock is worth the care required to navigate. Teakettle is one of the finer alpine climbs I've done. Its coffee table-sized summit was a hoot.

The following pics are from previous trips and used to present Teakettle Mountain and Potosi Peak. The spout succumbed to gravity and snow during the 1998/1999 winter. The second picture is of the tiny summit.

Upper Yankee Boy Basin is home to 13,694-foot Gilpin Peak (rank #149). Crossing the saddle between Gilpin and Sneffels will deposit you into the spectacular Blue Lakes Basin.

Snaefell – More or Less
Day Two of our wildflower trip found us in the Mount Sneffels area, high up East Fork Dallas Creek at the Trailhead for Blue Lakes and Blaine Basin, both potential staging areas for a climb of Mount Sneffels from the north. The standard route is on the south side. Normally, we ascend to Blue Lakes. However, we chose Blaine Basin this time around because I had not visited it for a while. I hadn't been in Blaine Basin since May 1994, when I climbed Sneffels via the Snake Couloir route. Everything was still snowbound at that time.

In the background, 14,150-foot Mount Sneffels (state rank #27) plays hide-and-seek with the cameraman. 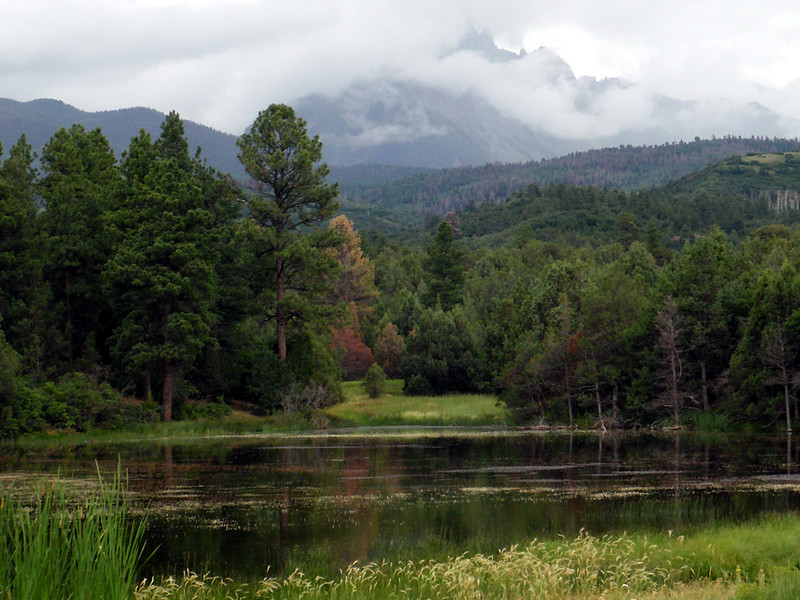 We're in the middle of the monsoon season in Colorado. The southwest mountains are especially affected by the monsoonal flow. In a nutshell, lots of water and thunderstorm activity. As a result, we stayed below treeline. Despite the wet, we did get some moody photographs. I hope you enjoy!

The red "berry" actually is a non-evasive gall. Inside the gall resides a mite or a wasp, I'm not sure which in this case.

Colorado's state tree is the Blue Spruce. They are very blue this year. 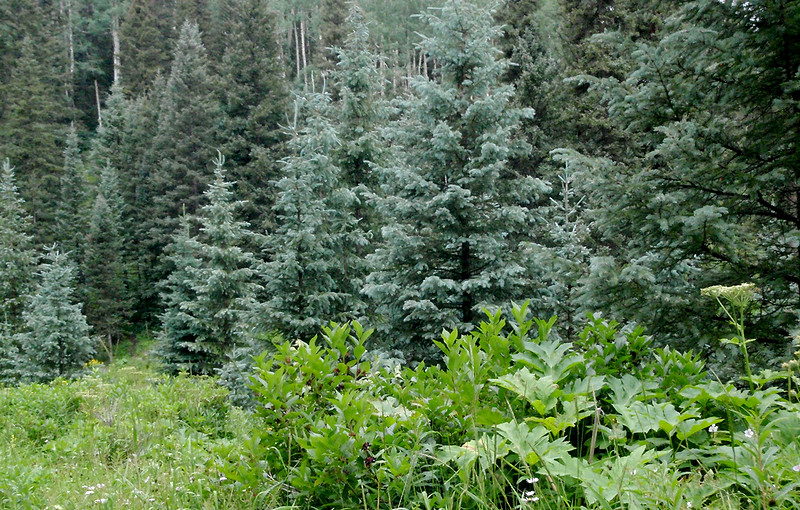 13,041-foot Walcott Mountain played with a silent, mystical mist throughout most of the day. 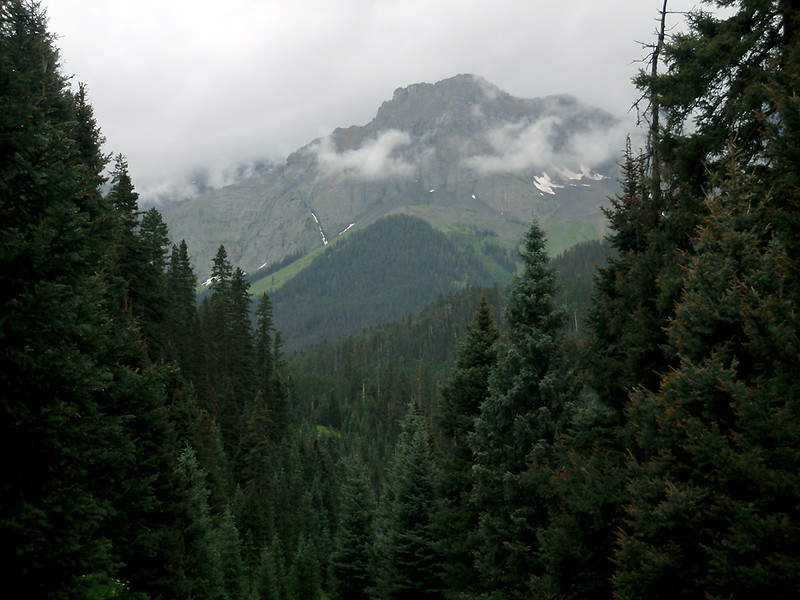 Help! Do you know what this bad boy is? I think it's a saxifrage of some sort. 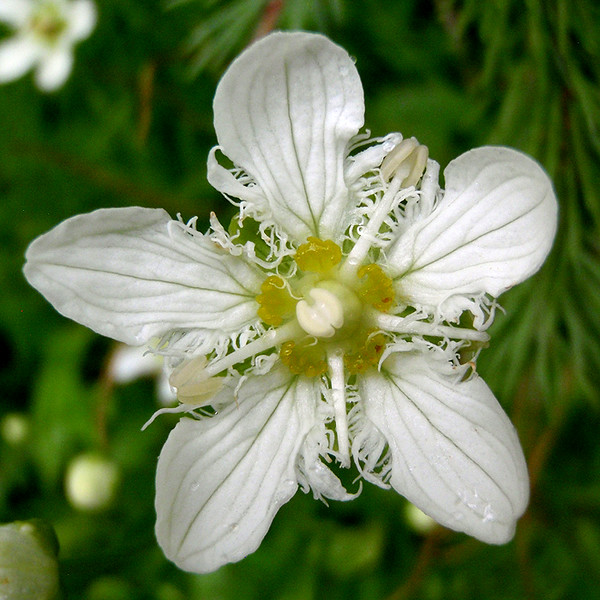 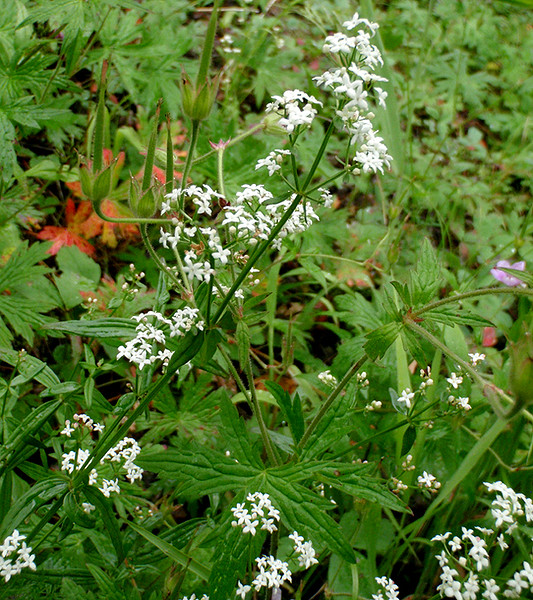 A bridge now exists. However, there was a time when crossing East Fork Dallas Creek could be a task during spring flows.

A monastery of monkshood waves in the background. Monkshood is one of my favorite flowers. They can be quite thick (hence my monastery label) and reach heights of six feet of better.

Mount Sneffels is in there somewhere. Mount Sneffels, along with a handful of adjacent peaks over 13,500 feet in elevation, can create its own weather.

Thanks for visiting. Our next stop is Yankee Boy Basin; a high, flower-smothered gem on the other side of Mount Sneffels. Stay tuned.