Spring?
For A Day Anyway
Last Tuesday's snow quickly melted. Today's (Friday) mercury catapulted into the Low 50s. Spring was in the air. It'll all change come March and April. In fact, March is our snowiest month. Nonetheless, it was a good day to take the steel steed south of the metro and pound some asphalt and prairie. Following are some pics.

I left the carbon fiber bike at home and went with steel today. 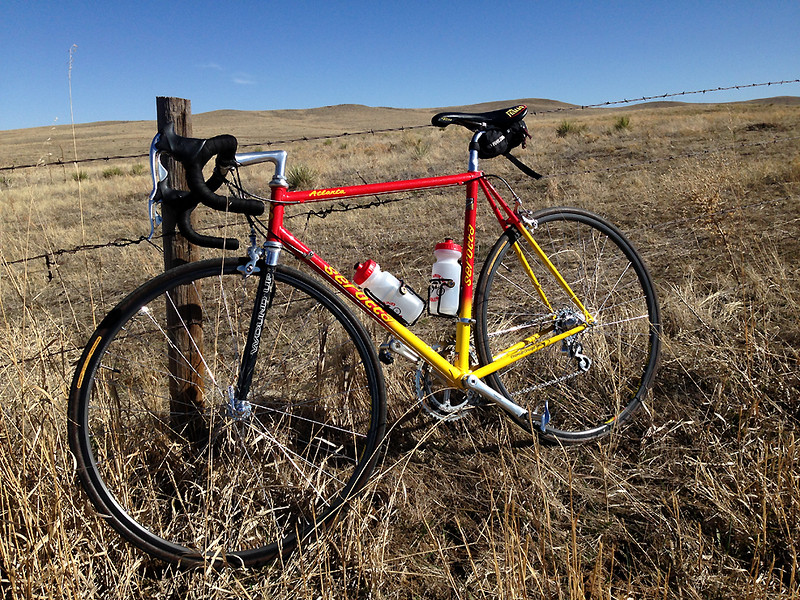 The wide-open prairie grows on you, just like the mountains, desert and ocean. Each is unique. 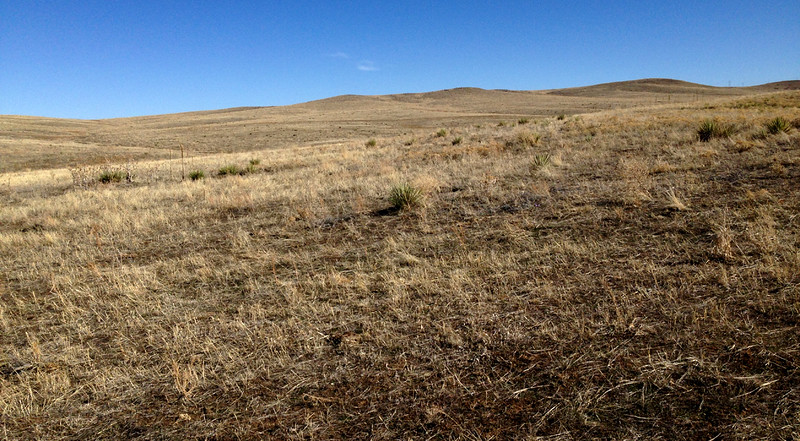 Gimme an S...
This past weekend Snowcatcher and I ventured out to the Chatfield Reservoir area to enjoy the spring-like weather blanketing the Denver Metro. For a change of pace, I decided to ride my steel-tubed Serotta. The last time I threw a leg over her probably was back in 2002. I purchased the bike on 06 February 1996. Hence, it would be a 20th anniversary ride as well. Most components are original; however, the carbon fiber forks are not original and have a story themselves. That being, I crashed into a rock retaining wall on Colorado National Monument after losing front traction on icy hard-packed snow. The crash results included backward bent (destroyed) original forks. About a year ago, I performed a lube, bearing, cable and anything else requiring some maintenance go-over on the Serotta. See overhaul Part I and overhaul Part II. It was due time for a ride.

Steel is real! A quality steel frameset feels the road working its way through the tubing. It's something you feel as part of the bike. Difficult to describe, it has a silent, soft "buzz" to it. When the road surface changes, the "buzz" also takes on a new element. On the other hand, steel can be a bit corpulent by current standards. Scaled, the Serotta weighs in at 21.5 pounds (considered a tad heavy). The carbon fiber bike I normally ride weighs in at 16.5 pounds. Albeit super light, carbon fiber just doesn't have the road feel steel offers. Carbon is highly muted with the occasional pothole thud. The Serotta still has "man gearing" from when I was a bit younger and stronger. I give solid Uhg to climbing with the 53/39 front and 8-speed 12/23 rear gearing. I've become weak pedaling around on compact 50/34 front and 10-speed 12/28 rear gearing. I attribute the latter gearing to mountain riding. However, I know better than to cop out. 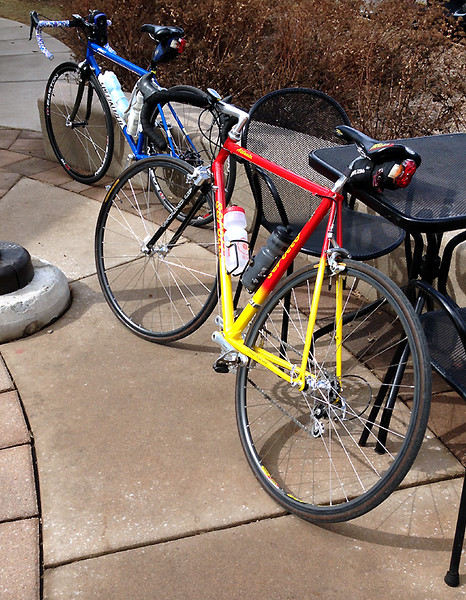 The fastest speed I've attained by bicycle is 63 miles per hour with the help of the steep, north dam road below Horsetooth Reservoir, just west of Fort Collins, Colorado. The descent was comfortable on the Serotta. However, I would not be comfortable at that speed on my carbon fiber bike. I've had my carbon bikes into the 50-mile-per-hour range, and it was not comfortable; albeit very exciting. Following are some additional pics from our ride. Let's continue with a nice active beaver pond in the Chatfield area. Enjoy! 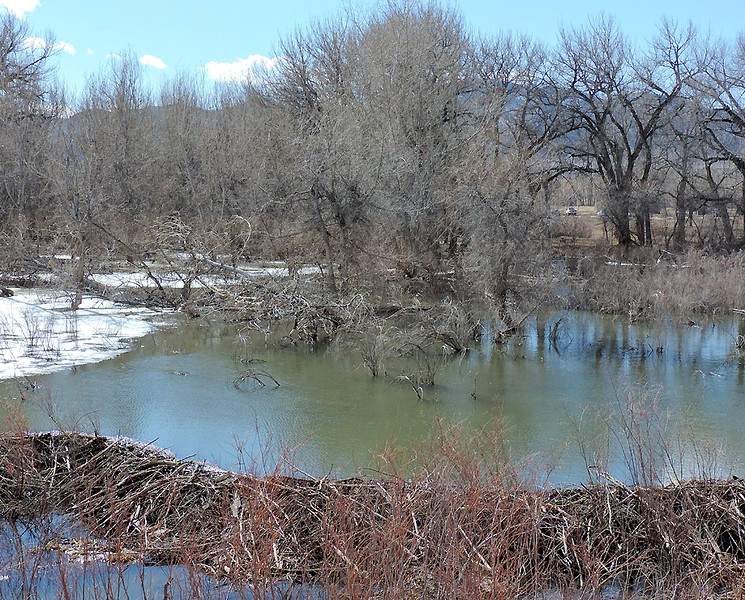 It was a big sky day at Chatfield. 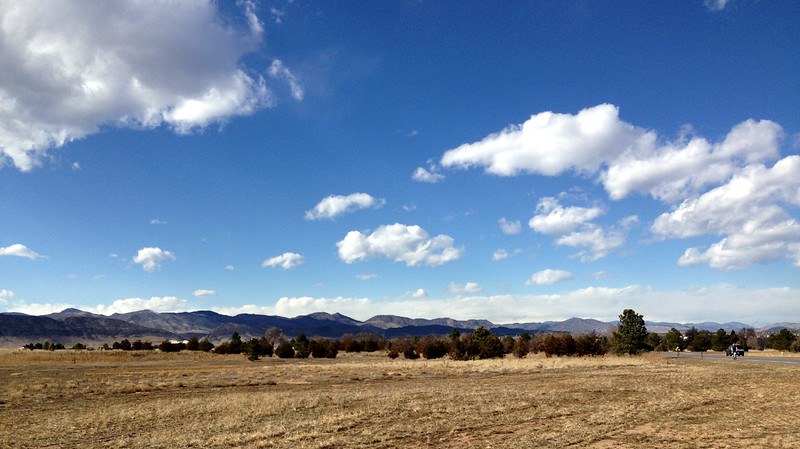 More snow is forecast for the coming week. We enjoyed the temperate calm while we had it!

A Grand Mesa Birthday
Snowcatcher and I spent a heart-filled birthday and Valentine's Day on Colorado's West Slope. We spent Snowcatcher's birthday on the Grand Mesa and then spent the evening in a rose petal- and candle-filled room. Our intention was to ski Sunday as well. However, stormy conditions on the passes had us heading home a bit early. Following are some pics from the weekend under a big sky at 10,600 feet in elevation. In the following pic, a pickup in the upper left can be used for scale. Albeit the snowpack has settled a bit, depths stilled averaged 4 to 5 feet.

The Mesa having been warm and without fresh snow for a week or so, existing snow was beginning to take on spring conditions a month early. This will change; it's still February. Our big month for snow accumulation is March. Nonetheless, as seen below (blocky fracture of snow), there was a bit of firnspeigel (sun crust) developing. 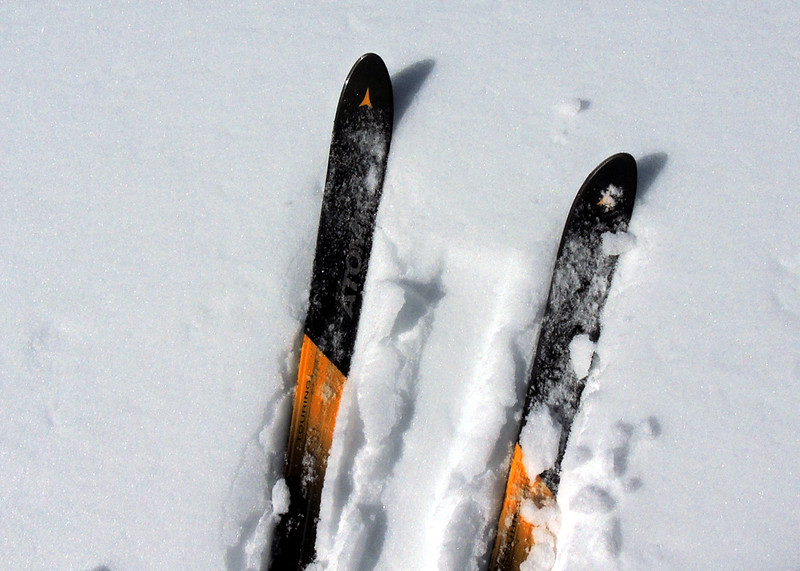 ... and baby blue was the color of her eyes.
Baby blue like the Colorado skies...
-George Strait

A heart for two! 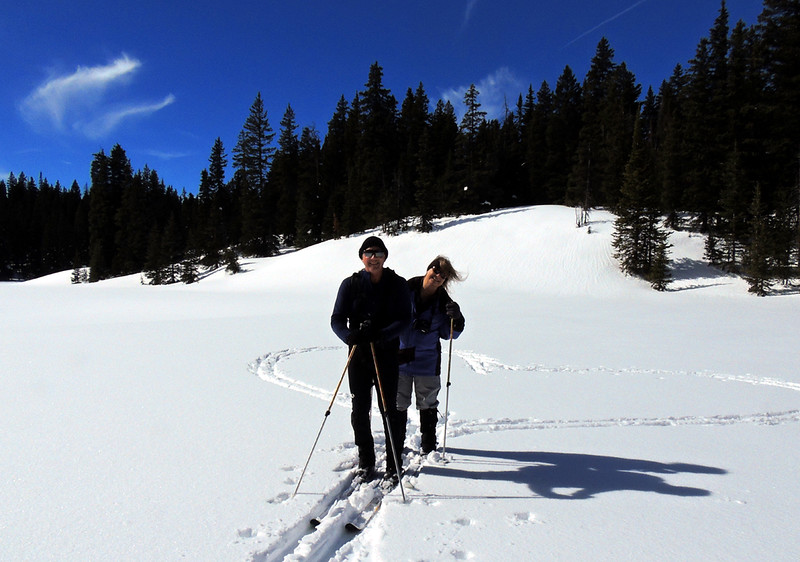 The Flake Master at work!

Pinwheels can result when dry snow (cold winter snowpack) becomes wet (melt) for the first time. Pinwheels are more common farther into late-winter/spring when the snowpack is taking on spring-thaw conditions and becoming saturated. Pinwheels also are called "rollerballs" or "snow snails". They indicate a good time NOT to be on steep slopes. We easily stayed off steep slopes this trip.

That's it for this round. Check back. I always have some sort of adventure to share.

Winterland
I journeyed up to Copper Mountain Ski Area, Colorado, to make some turns this past Thursday. Almost two out of three of the free parking lots were full; not bad for a Thursday. Lots of folks are possibly playing hooky and enjoying March/April temps. There were more people than I expected. The snow, old and abused, actually wasn't too bad either. (Old and abused indicating some fresh snow would be nice.) Above treeline, things are quite wind-scoured. Some fresh snow would be a boon.

Copper Mountain has natural terrain for all abilities. The east side (below) and backside bowl skiing is expert. The middle area boasts some fine intermediate glissading and the west side makes the aspiring novice grin. 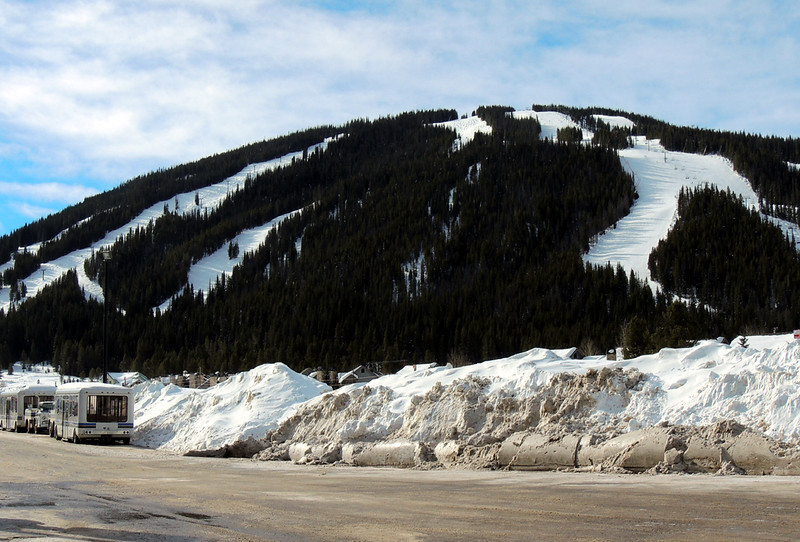 A bird's eye view north above Tenmile Creek and the I-70 corridor. 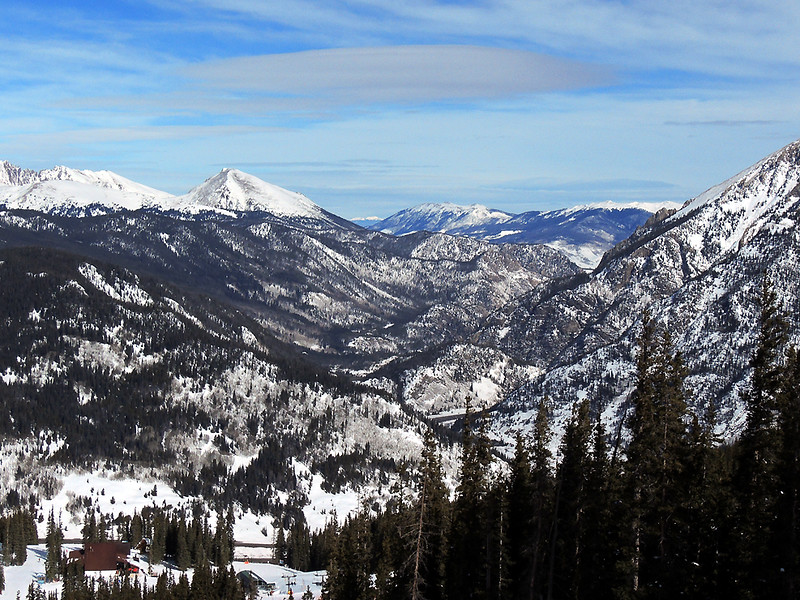 Here's a typical groomed run amongst the trees. Copper has some nice fall lines.

Copper Mountain has several natural snow bowls on the backside of the ski area. The bowls offer sought-after powder skiing. However, they morph into bump (mogul) runs if the snow gods are playing hooky. This photo is of a mogul-ridden Spaulding Bowl. The ski area's high point touches the sky at 12,441 feet and is in the upper right corner of the photo. 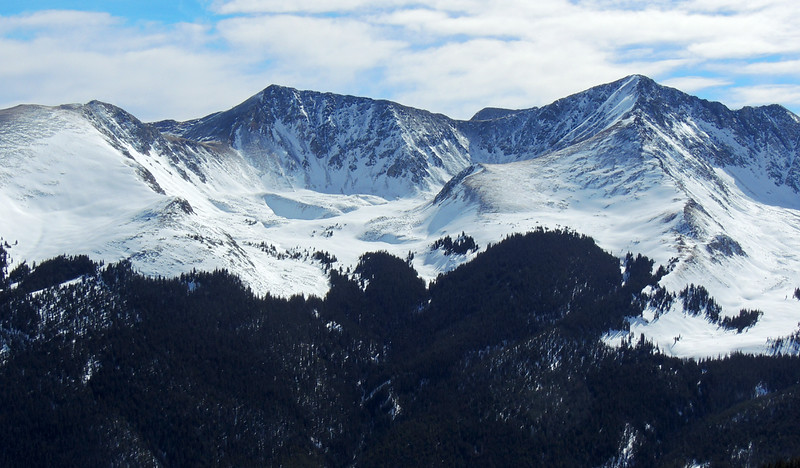 A mellow-looking Point 12,293 with a nice cornice developing. In the photo, look for the bright, thin line of snow following the right ridge of Point 12,293. For those of you curious as to what a cornice is, it's an overhang of snow deposited by the wind off a terrain break like a ridgeline. One also may be seen in the Pacific Peak photo along the ridge in the right center of the photo. Cornices can be quite unstable and dangerous, often collapsing under their own weight. They also can get quite large and exist well into the spring until they collapse under their wet snow weight.

Late afternoon shadows start to mature on Crystal (left) and Pacific Peaks as I load up the 4Runner and head home.

All photos courtesy of Snowcatcher
I have only a few more bikes to share. If I got anything out of the expo, it would be that I miss the era of cycling in which many of these bikes flourished. I like round, lugged tubes. I actually believe "steel is real". I also like tig-welded frames (aluminum and titanium). I would like to learn more about Magnesium as a frame material. I've been riding carbon road frames since 2002, and my next road bike frame will not be carbon. The frame most likely will be purchased from a small, hand-built, boutique-type shop. Nonetheless, on with the show. 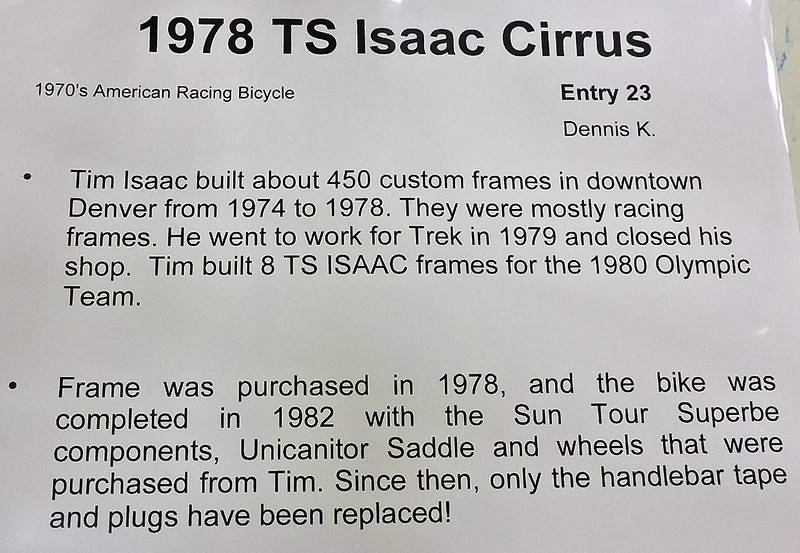 The first thing to catch my eye on a bike is the lug work. I like simple lugs, nothing too ornate.

How about some Cinelli handlebar etching? 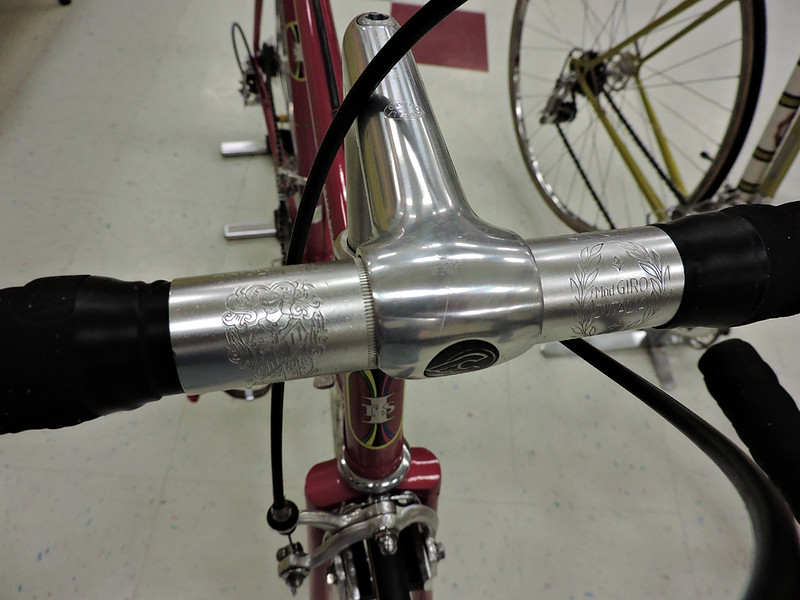 Another frame builder I'm not familiar with until now.

The lugging is quite elaborate and captivating. Notice the curved seat and chain stays in the second photo.

I wish we had more track-racing in the states. I like indoor and outdoor velodromes.

No brakes, one fixed gear and bred to fly. Track racing is the epitome of heart, legs, lungs and the clock.

Thanks for reading! Stay tuned...

All photos courtesy of Snowcatcher
Following are more photos from the bike expo in Golden, Colorado. Let's start with snow riding bikes. Before modern fat bikes (bikes with super wide rims and tires), one builder was experimenting with snow buoyancy by welding rims together to get some width. Enjoy!

It would be fun to see how it handled.

This is a setup for self-supported rides like the Colorado Trail and Tour Divide (Canada to Mexico).

How about some Italian heritage steeped in European cycling history.

Belgian Eddy Merckx is considered the man of professional bike racing. He raced from 1961 to 1978.

The American 7-11 Team rode Merckx bikes. They also showed Europe they could compete at their level.

Check out the Campy Delta brakes. It's my understanding these brakes were a bit portly.

Beautiful bikes! Part III should be up in several days. Thanks for reading!