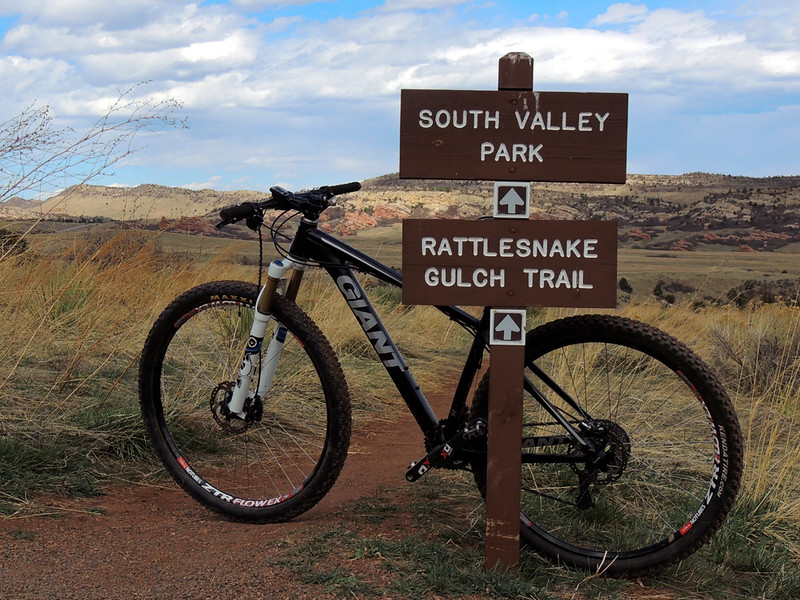 Get It While You Can...
The Black Pearl and I ventured to South Valley Park for an afternoon ride just hours before a fast-moving storm blanketed the Deer Creek Canyon area with 15 inches of heavy and wet white stuff. The accumulation was some variant of snow; hence, the word stuff suffices.

Sections of South Valley Park were an active cattle ranch until 1980. Off topic, but the approaching storm may be seen in the background.

The area is for now preserved and home to elk, deer, bear, lion, coyote, fox, rattlesnake and humanoid, et cetera.

Headquarters for the Johns Manville Corporation (I believe they owned the farmstead, too) were built on a parcel of the ranch in 1971. Then in 1987, Lockheed Martin purchased the property, adding to the several Lockheed compounds already in the area. The property turned over again in 1999 when Jefferson County acquired 909 acres to set aside for open space preservation of wildlife, archaeological and scenic values.

Violators will be shot on site! Just kidding! Trail erosion is the reason for the closure.

The Grazing Elk Trail sits above the beginning of one of the finer road bike climbs in the area – Deer Creek Canyon. You can make out the entrenched, narrow canyon below.

Riparian areas are turning green. I haven't seen any rattlers this year, despite the warm weather.

The Park has a lot of smooth, somewhat flowy, singletrack upon which to ride.

Here's a parting shot for this post; thanks for reading!

I'll Find Myself Some Wings
Snowcatcher and I went craning this past weekend at the Monte Vista National Wildlife Refuge in the San Luis Valley of south central Colorado. The Rocky Mountain population of Greater Sandhill Cranes uses the San Luis Valley as a "pit stop" during migration between winter and summer ranges.

A few physically smaller Lesser Sandhill Cranes also may be found, but the Lesser Sandhill primarily migrates east of the Rocky Mountains via the Nebraska flyway. The San Luis Valley is surrounded by mountains on three sides with the Sangre de Cristo Range towering to the east, the wild and woolly San Juan Mountains to the West and the sky-piercing Sawatch Range to the north.

Not too hindered by the ice.

As the day warmed, the cranes styled a bit.

The San Luis Valley is a layover site rich in food and wetlands. During the spring, approximately 20,000 cranes use the region for rest and foraging prior to heading northwest through the mountains to the Greater Yellowstone breeding grounds. In the fall, the birds stop in route to New Mexico's Bosque del Apache National Wildlife Refuge where they'll hunker down for winter.

Elegant, yet gangly describes the spring courtship dances that take place in the San Luis Valley. Moreover, the birds mate for life. As for size, an adult Sandhill is approximately 4 feet in height, with a lift-generating 6-foot wingspan. They have a unique call that is easy to recognize but almost impossible to imitate. 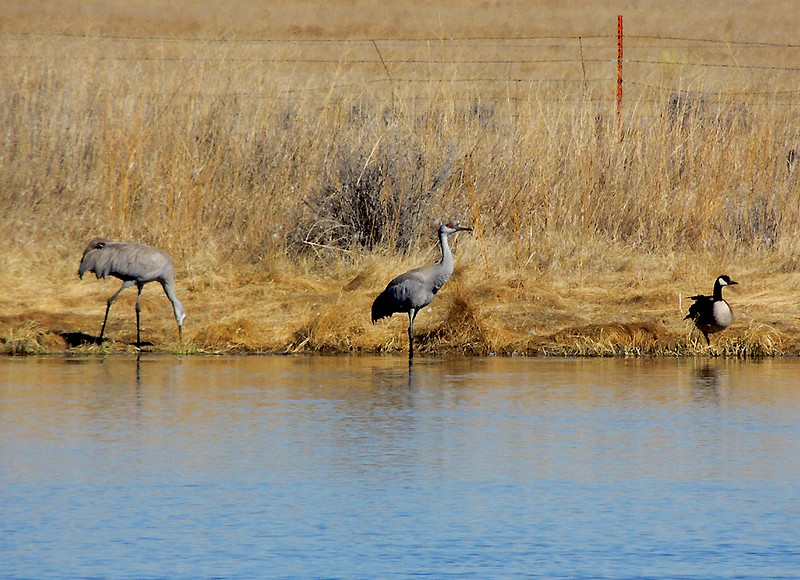 Cranes feast in farmer's fields, then overnight in local wetlands.

A stone's throw from New Mexico, the region also is rich in American and Mexican history dating back into the late 1700s.

A Change Of Pace
Several days ago, I managed to get in a short-sleeved (green plaid for Mrs. Micawber) hike-a-bike with the Black Pearl at Deer Creek Canyon Park. This park is a couple of miles north of Waterton Canyon. However, often during this time of year, ice and snow still may cover the trail, making passage interesting. How slick was it? Well, my average speed for the "ride" was 3-miles per hour. That tells me I walked more than I rode. When dry, the route is rocky, steep and technical in places. However, any time loss to upward travel can be regained on the return downhill. Following are a few pics of a beautiful spring-like day. 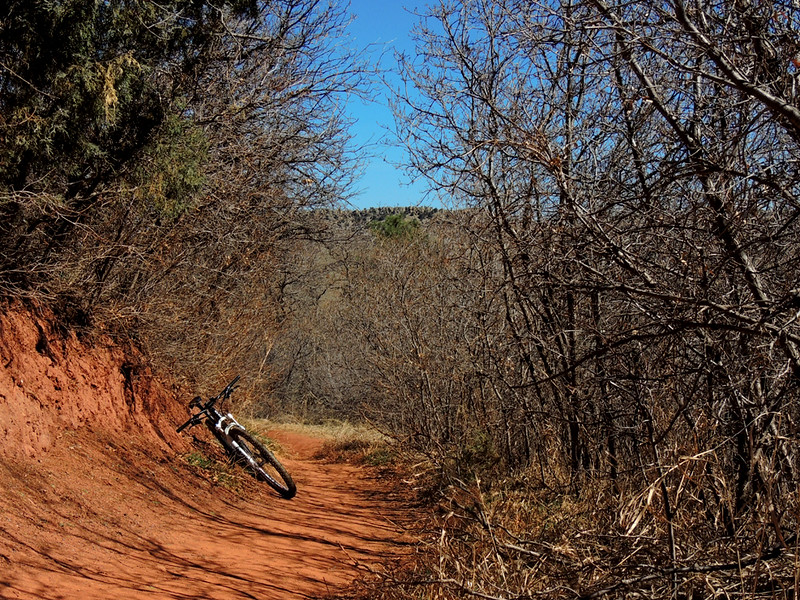 My destination is a tight little drainage where prairie meets mountain – Plymouth Creek.

The initial ice encountered had enough embedded detritus to allow riding. I wasn't so lucky on most of the ice. 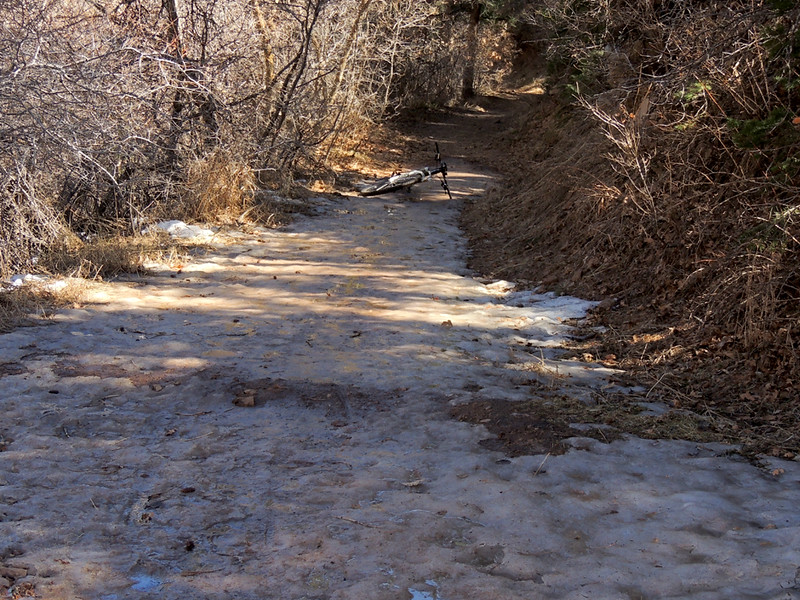 How about some nice, dry, singletrack?

The mile-high city is about 28 miles away. That's not dust or water vapor in the sky. Yuck!

My parting shot for the Deer Creek Canyon area.

It's Right Around The Corner
The Black Pearl and I ventured up Waterton Canyon to the fork of Trail 800 and the Colorado Trail. This was a reconnaissance trip to see how much snow was hanging around. There are a few patches of snow here and there, and this segment of trail was quite ride-able. Many of the numerous trails following the narrow foothill drainages may still be snowbound; I'll test some of them on an upcoming ride.

The following snowbound pic was taken this past 27th of January just beyond the farthest left turn in the road in the above pic. A lot of snow has melted during February and early March. On the other hand, we can receive a lot of snow March into April.

After a short, stiff little climb, the intersection of Trail 800 and the Colorado Trail is reached. This intersection is upper Lenny's Bench. The bench is in memory of a boy scout who lost his life to an accident in the area. I know nothing about the accident. About 520 miles southwest of this photo, the Colorado Trail reaches Durango, Colorado. The bike route takes several detours to avoid a handful of wilderness areas.

You may be wondering why my bike is in many of my pics. Well, yes, I'm a bit attached to it. But more importantly, it provides visual scale. It affords a reference to trail width, trail roughness, snow depth, or anything else desiring some sort of scale.

The forest understory is starting to green up a bit.

The trail switchbacks up (and down) through a Lodgepole pine (Pinus contorta) ecosystem.

Below are typical switchbacks encountered along this particular trail.

The above turn in context. The turn looks a bit distant because the photo was shot in wide-angle to capture the whole turn.

Moab Delights
Recently, Snowcatcher and I snuck in a mountain bike visit to Moab, Utah, while returning to Colorado from a trip to Salt Lake City, Utah. We decided to cut the distance home into 2 days, which allowed us to ride early the second day. We both are quite fond of Moab and surrounds.

For our rides, we headed north to the Moab Brands Trail network. The brand named trails are Bar M, Circle O, Rockin A and Bar B with the second-half letters spelling MOAB. From the staging area, we started together on the EZ Loop. Once to the Bar M trail, Snowcatcher rode the Rusty Spur route while I tackled the Bar M and Rockin A before returning to the staging area via the Bar M. 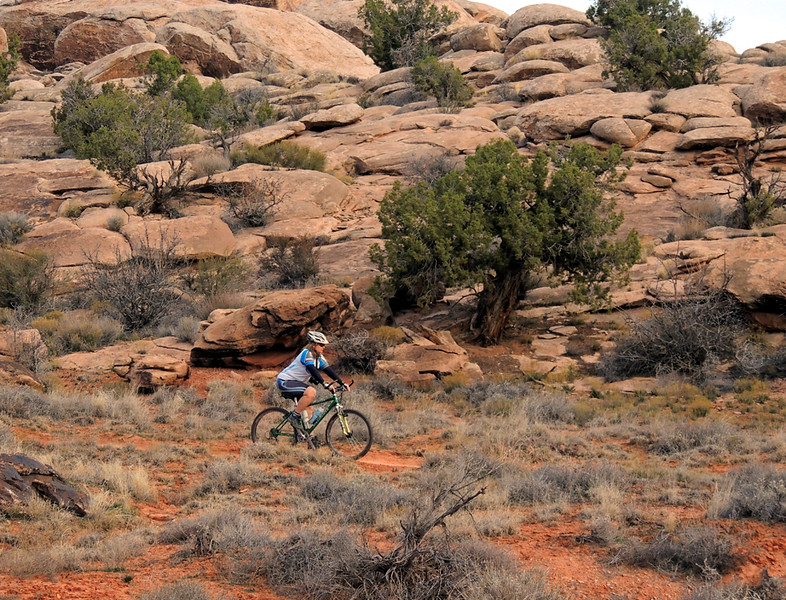 The hazy 11,000- and 12,000-foot peaks of the Manti La Sal Mountains rise in the background. The picture haze is the result of a controlled burn not far from where we were riding. Hopefully, the wind didn't make things too worse from an out-of-control fire standpoint.

The Rockin A route travels across ancient sandstone for its entire length. That's Arches National Park in the background. North Window Arch can be seen in the photo. It's a rather interesting line of site because there are numerous large arches around North Window Arch, and they aren't seen in this photo.

This is where a lot of snowmelt ends up along the Rockin A Trail. As summer beckons, the water will evaporate. This particular pothole (erosion feature closest to the bike) was about 3 feet deep and already teaming with aquatic insects. Many of the insects burrow until moisture returns. Summer thunderstorm events (and flash flooding) can recharge potholes and intermittent streams as well.

The Manti La Sal Mountains tower above a sea of ancient stone. Newer map nomenclature excludes Manti for some reason; the peaks are now simply referred to as the La Sals. Mount Peale is the highest peak in the range, touching desert sky at 12,721 feet. Moab sits at the western base of the Manti La Sal Mountains at an elevation of approximately 4,000 feet. 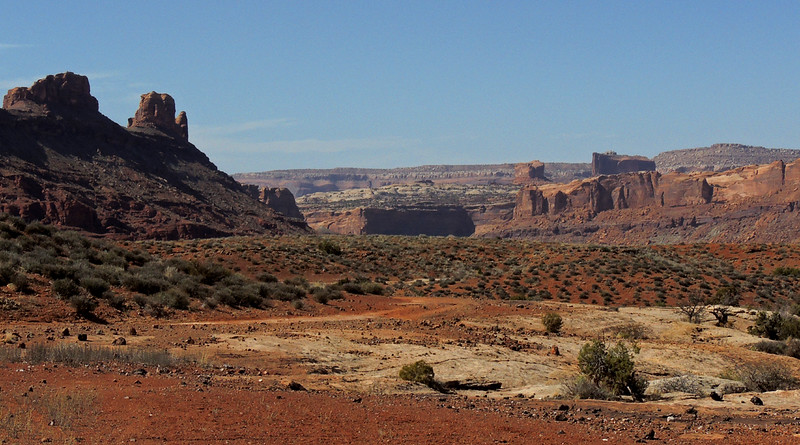 Bike season is just around the corner, and I'm very much looking forward to it. More to come...