A Little Midday Ride In The Heat

I managed to get out for a midday ride recently. The day heated up early, but I was able to beat the afternoon showers.

The slack water behind a small roller dam along the South Platte River looked rather refreshing. However, swimming isn't allowed along this reach of river because anyone who goes over the dam gets sucked under, especially when the head gets beaned on the way down. I can't help but think what Tom Sawyer or Huck Finn would do with this cool, clear water before the dam existed. Doesn't really take a lot of thought, does it? Following are some pics.

I often have music on the brain while riding; so how about a little "name that band"...

"Hot town, summer in the city
Back of my neck getting dirty and gritty
Been down, isn't it a pity
Doesn't seem to be a shadow in the city

All around, people looking half dead
Walking on the sidewalk, hotter than a match head..."

At low elevations, we're heading into our dry season. Up in the clouds, alpine flowers are just beginning.

Zues appears to have found me. Yes, I'm a lightning magnet.

Getting a bit angry, are we? You need to watch that cloud anger.

This one continued to darken and chased me out of the canyon. We did have some nice afternoon rain. 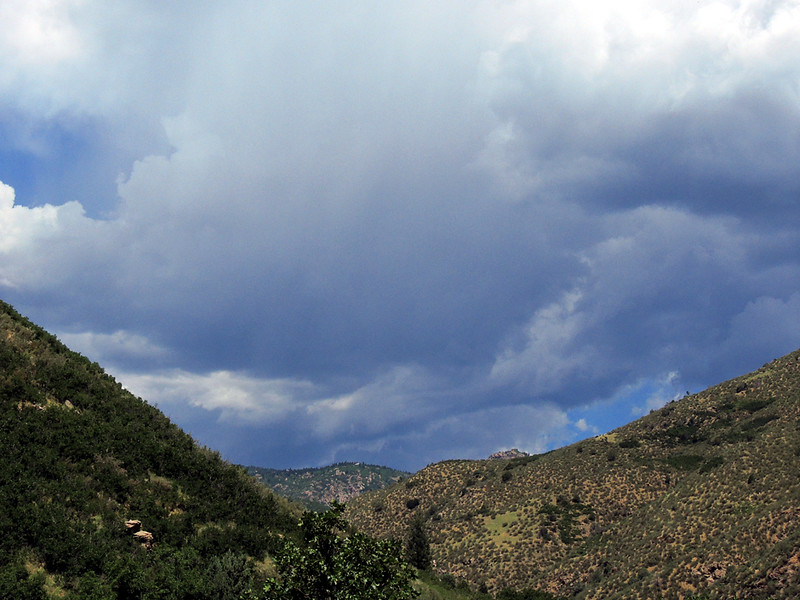 That's it for now.

Snowcatcher found a snake napping several feet above ground in the leaves.

Just Another Day In The Saddle
Snowcatcher and I got an afternoon ride in yesterday between t-storms. You probably can guess where. I'll leave it at that. In the lower photo the South Platte River flows several more miles before exiting onto the western-terminus of the Great Plains.

The twisty turny climb to upper Lenny's Bench is a good huff and puff.