The Heat Is On
Hi folks, it appears the nice weather gods are showering us with affection; it's only mid-February. What's a lizard to do, except bask in in their exaltation and ride as much as possible. Our snowiest month typically is March, right around the corner. The trail appears to have a new friend (not the Pearl) — The Colorado Mountain Bike Association. Probably a good thing.

Hey Giant, how about a new bike for all the advertising the Pearl and I do.

Annual blow-down will stop you in a hurry if you're in a fog.

Narrow, deep and sunless, many drainages were still choked in snow. I turned around here.

That's the end of one day.

The 2017 Mountain Bike Year Begins
Ol' man winter has allowed a handful of early rides lately. Despite some brutal cold (see earlier posts), we've had a handful of nice, almost spring-like days. While north aspects remain frozen, south aspects are opening up. Snow is minimal, but the trails all have a shallow icy surface, despite their tame look. The following pic is a view north showing the snow-free southerly aspects of Waterton Canyon, Colorado.

A joint trail here, trail 800 and the Colorado Trail look tame enough. Yet, the trail was deceivably icy.

Ridge tops and their southerly neighbors looked like this.

This corner, and a bit below, was the most slippery segment of the ride. 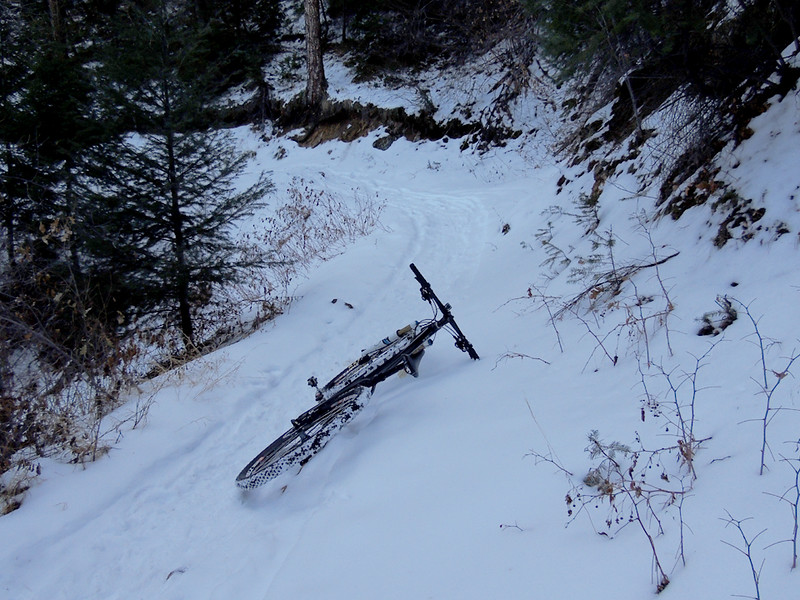 This is a common preseason turnaround point. This also is the upper Lenny's Bench you've heard me write about. Lenny was a scout who was killed while working on a service project. I think he died in this area, but I'm not entirely sure about that.

That's it for now. We're inch-worming closer and closer to spring and more fun outdoors.