Island In The Sky And A Dead Horse
Snowcatcher and I continued our adventure with a trip to the Island in the Sky District of Canyonlands National Park. Dead Horse Point, which is on the way, always gets a visit too. In fact, we were going to mountain bike some of the Intrepid Trail System while at Dead Horse Point. Disappointedly, the weather put the kibosh on that plan. On the other hand, we enjoyed playing sightseer for the day. The below shot is a view to the southeast from Dead Horse Point. 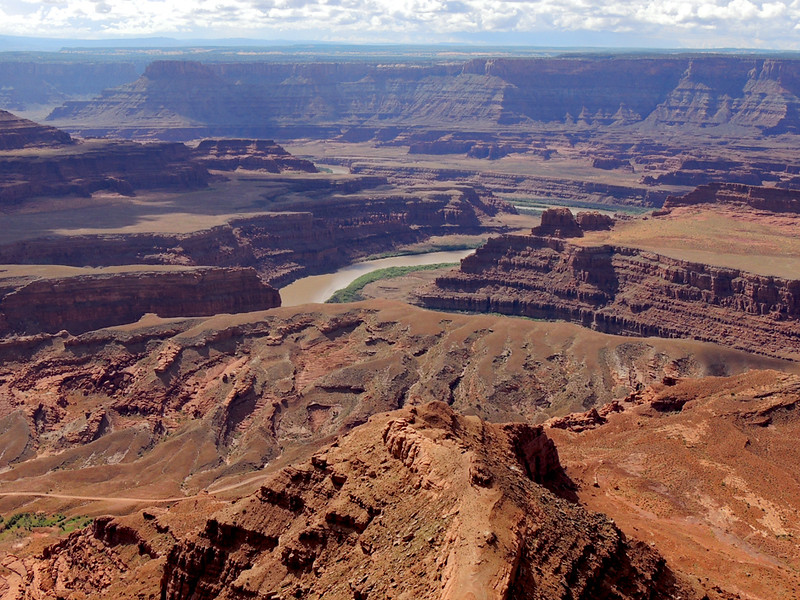 Dead Horse Point legend is a bit gloomy. So, either read on, or skip this paragraph. Local lore has it that cowboys rounded up wild horses and herded them across a narrow bit of land out onto the point (Dead Horse Point). Being only 30 yards wide and surrounded by cliffs, the narrow neck was easily corralled with wood and brush. The cowboys would select their wild horses and leave the non-chosen penned up without water. Eventually the penned horses died of thirst. On a brighter note, the views downriver are outstanding! The Princess Plume (Stanleya albescens) was in full bloom as well.

Thunderstorms began approaching from the south by mid-morning. 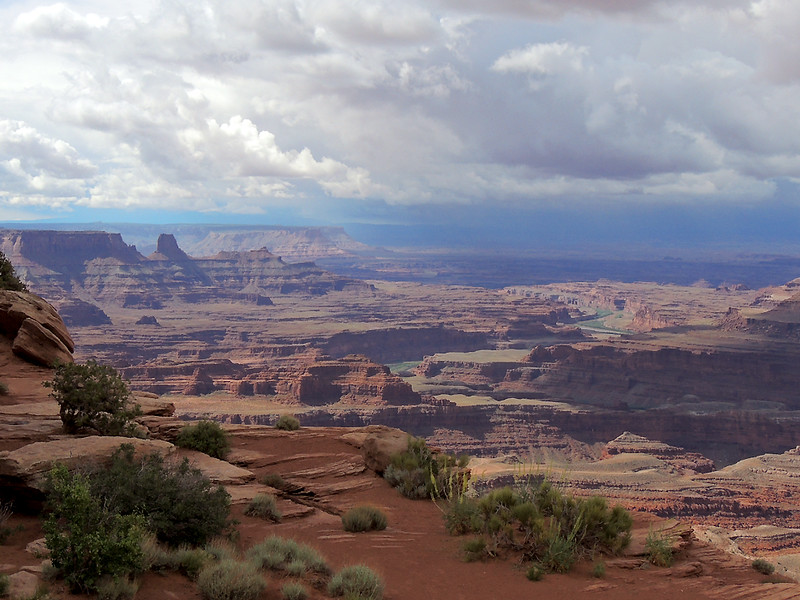 This is one of the numerous Colorado River goosenecks found throughout canyon country. The river flows left to right. The road at the bottom of the pic is the Potash jeep road. It connects with the Shafer Trail Road from below. Shafer Trail is accessed from the top. Either road provides access to the remote reaches of the White Rim 4x4 Road.

The storm quickly overcame us, and we drove an hour down to Moab to grab a bite to eat at Zax's Wood Fired Pizza. Better yet, Snowcatcher and I enjoyed our first date at this restaurant after a road bike ride through Arches National Park years ago. We enjoy eating here when in town, but the first date anniversary makes it a specially nostalgic locale. After lunch we took on a poppymallow excursion. The poppymallow (Sphaeralcea coccinea) was at peak, and we savored numerous massive patches of orange all across the desert.

I have one more blog post to go on this most recent adventure.

Goblin Valley
Our Utah trip continued with a visit to Goblin Valley State Park. Goblin Valley is a dense collection of eroded hoodoos. I've been there numerous times. However, this trip was a bit different as the park has put in a nice little selection of mountain bike-specific trail. Thanks to Snowcatcher's research, we had to visit. I'm glad we did; bikes aside, it's a lair of desert magic. Better yet, surrounding the park mysticism is miles and miles and miles of Bureau of Land Management (BLM) enchantment.

Goblin Valley resides in southeast Utah and is located southwest of the town of Green River and north of the hamlet of Hanksville. The Henry Mountains seemingly rise out of nowhere to an elevation over 11,000 feet. Perhaps we should have a "why the Henry's are there" blog sometime. 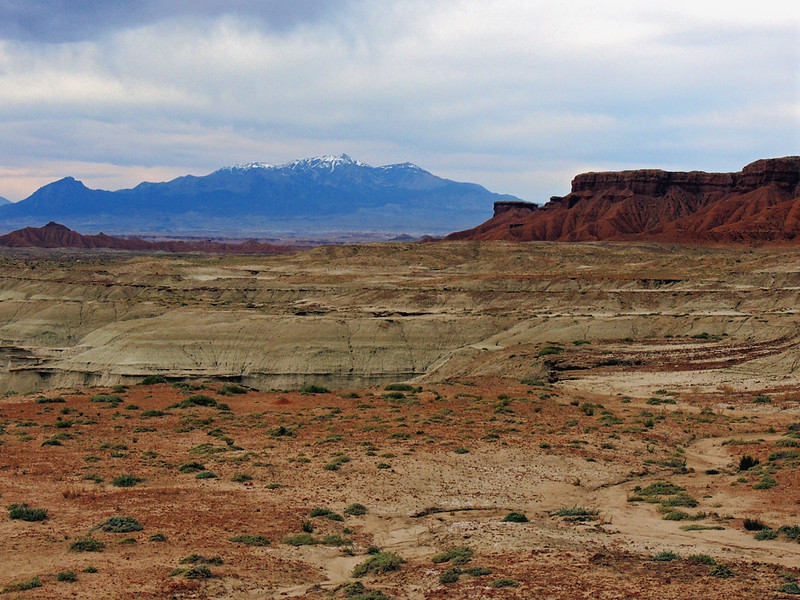 A handful of posts back, while sitting at 30,000 feet, I mentioned I was flying over a region where I had spent time doing hydrologic and geomorphic fieldwork. Well, here I was; right back in the middle of the study area again — kuule beanz! It's not quite as isolated as it was 29 years ago, but it's still in the middle of heaven. We even had the bike trail, which is less than a year old, mostly to ourselves. On a side note, if you're a rock hound, lots of exposed chert may be found scattered around. 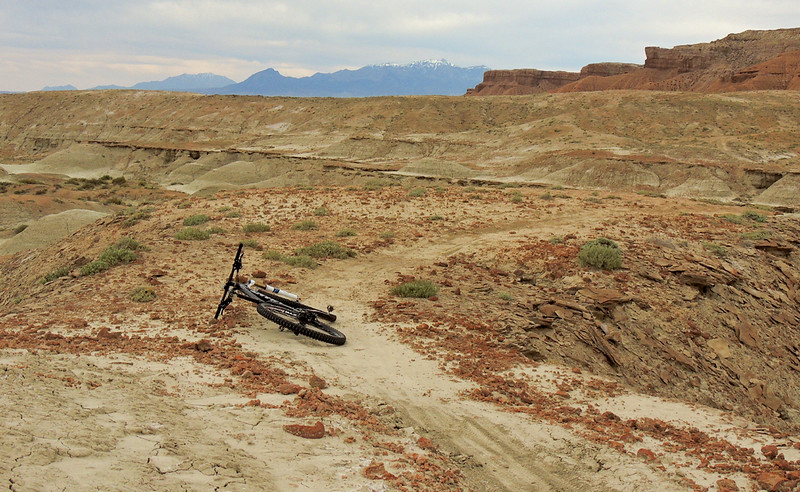 Some nice specimens of agate caught our attention too.

Wild Horse Butte rises to an elevation of 5,760 feet above the San Rafael Desert.

Stratigraphy of Wild Horse Butte tells the tale to those trained in this language. I'm not one of them.

I wonder what things will look like after another 1,000,000 years of geologic erosion. A time machine would be nice. In the following pic, the small road-looking feature just above right of photo center is actually Wild Horse Creek. The distant upthrust rocks just below the clouds in the photo upper right are the southern reach of the San Rafael Swell. 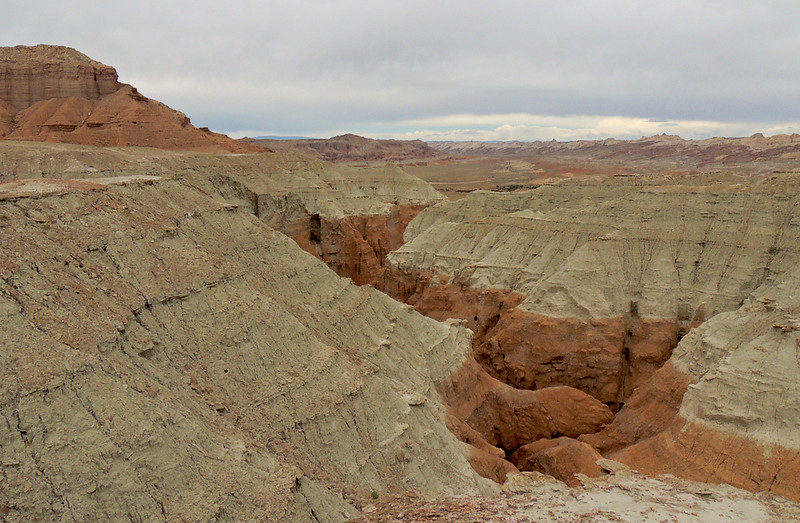 Another fine example of exposed agate caught our attention.

Looking south and to the left, Navajo Mountain touches the sky at 10,387 feet. On the right, the Henry Mountains greet the sky at more than 11,000 feet. The intricate canyon reaches of Lake Powell lie in between.

Who said nothing can grow in a desert?

All that's missing from this shot is a sun-bleached bovine carcass.

This is Goblin Valley proper. I grew up calling these erosive features hoodoos. 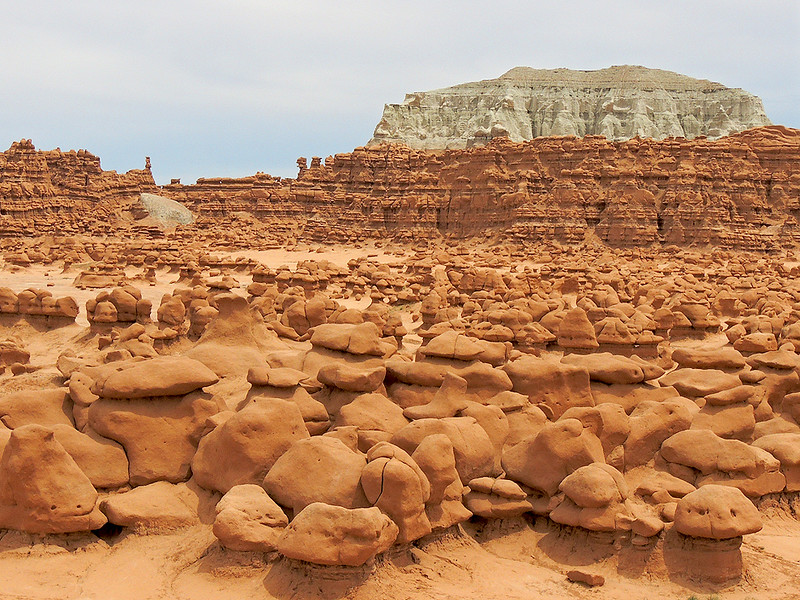 And another blog has come and gone. But, I have more, stay tuned... 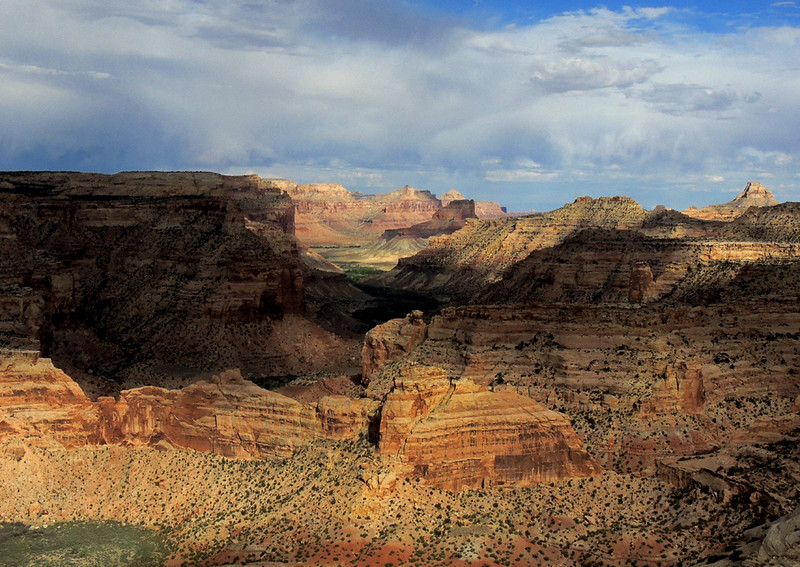 Utah's Little Grand Canyon
Following are some pics from the northern San Rafael Swell region. If you've driven I-70 West out of Green River, Utah, you no doubt have been impressed by the upthrust stone that looks impossible to breach. That's the eastern slope of the swell (dome-shaped anticline). North and south regions of the swell are split by I-70.

Snowcatcher and I visited the impressive eroded features of the northern region's Wedge area during a recent trip. If you ever visit this enchanted expanse, I recommend entering the Little Grand Canyon from the south via I-70 because of the enhanced canyon scenic values (although, it's all scenic). The start from the south is on typical ranch and Bureau of Land Management (BLM) access roads.

The northernmost extension of the central route of the historic Old Spanish Trail ran between Green River, Utah and Castle Dale, Utah, skirting the Wedge area to the north. The Old Spanish Trail was a trade route between Santa Fe, New Mexico, and southern California from the early 1800s to approximately 1850. The reason the trail goes so far north is to bypass the intricately complex canyon country of southern Utah and northern Arizona, which at the time was extremely difficult, if not impossible, to navigate.


After to 15 to 20 miles, the Little Grand Canyon came into view.

I'm not sure what these flagstone cairns were used for; our navigation was easy and straight-forward.

We enjoyed the erosive features of the Little Grand Canyon by cycling along the edge from the Wedge Overlook.

The San Rafael River flows through the canyon. The other side is Sid's Mountain Wilderness Study Area.

There is no better architect than time. 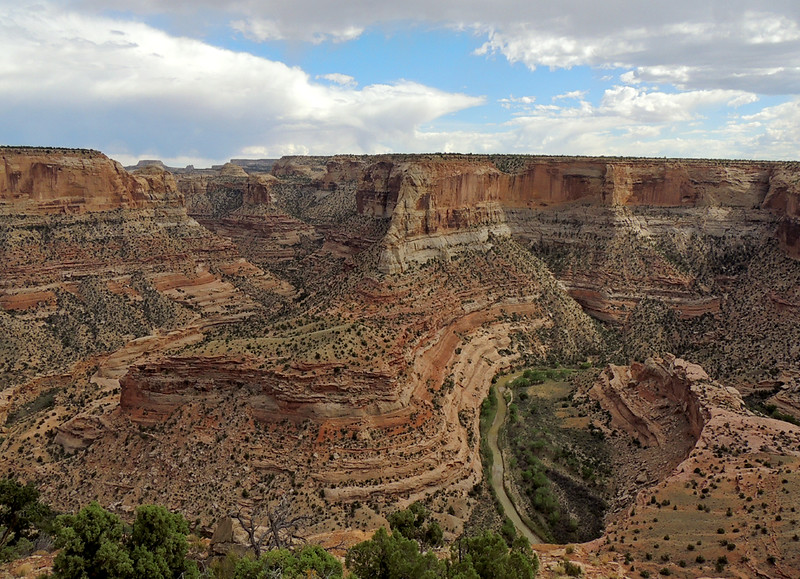 I'd love to explore the river bottom some time. 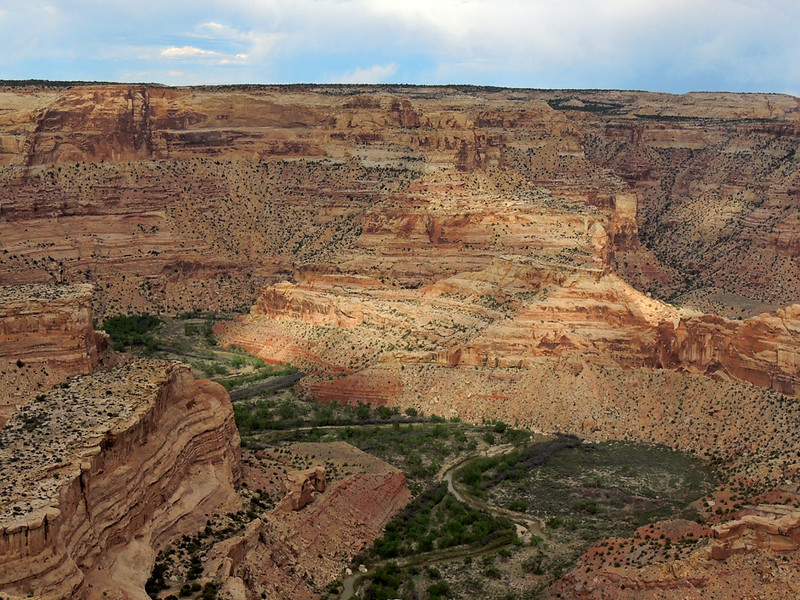 The weathered canyon uplands have a wrinkled personality all their own. 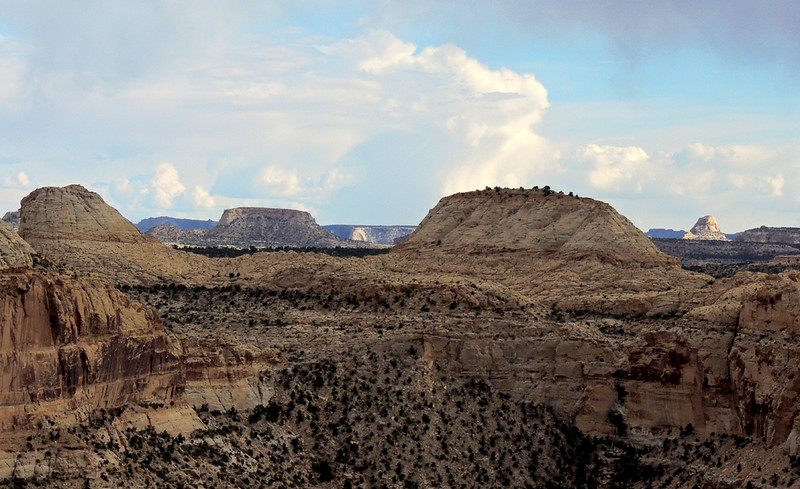 The low-light angle of early evening tends to bring the canyon to life.

39° 07'25'' N 110° 41'37'' W
A New Playground To Explore
Snowcatcher and I just spent some time in the Green River, Utah region. Our travels took us to the Little Grand Canyon, the Wedge and Buckhorn Wash. These areas are relatively new for us, and we'll be back to explore some more. The second half of our trip took us to some of our favorite haunts around the Moab, Utah area. Today's blog post features one of the highlights of our time in Buckhorn Wash.

Petroglyphs
We saw a few faint petroglyphs along the Buckhorn Wash rock art panel. A petroglyph is a figure carved or pecked into the stone. The Buckhorn petroglyphs are estimated to be from the Fremont culture of 1,000 years ago.

Pictographs
A pictograph is painted on a rock surface. The Buckhorn Wash pictographs dominate the artwork found on the panel. They are more than 2,000 years old and were painted by artisans of the Barrier Canyon culture. The red pigment was created with powdered hematite and possibly mixed with other materials such as fat. It's not known if either of these cultures is related to the Ute, Piute, Navajo or Hopi tribes. Buckhorn Wash is part of the Old Santa Fe Trail and has seen many travelers over time. Because of this, some of the panel has been subjected to vandalism — which is very sad. 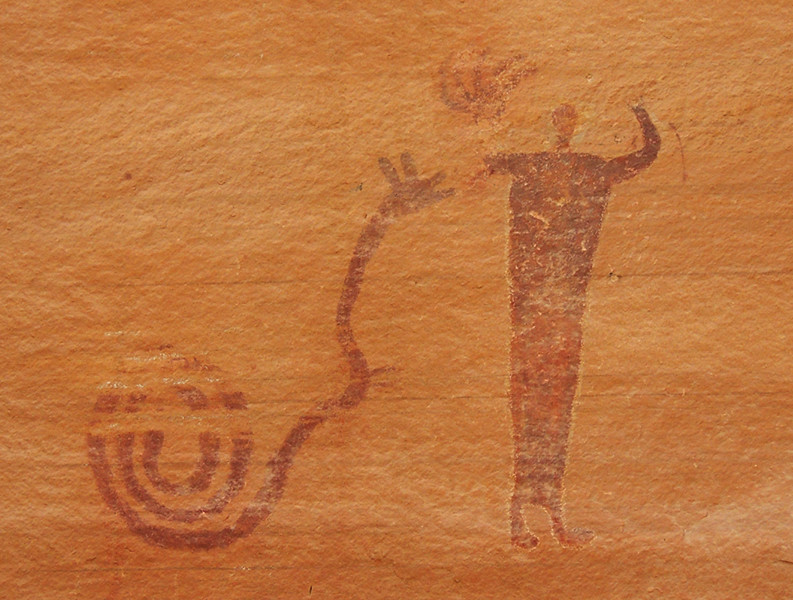 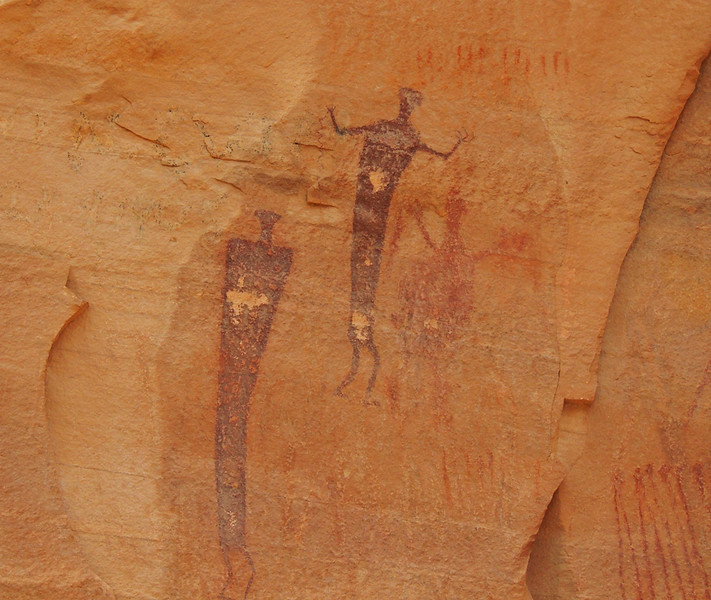 Thanks for visiting. More to come.

The Last Of Our Trip
This is the last post for my California trip. From the canyons of southeast Utah, we flew northwest across southwestern Colorado and its finest mountain range — the San Juan Mountains. In the pic below, Lone Cone (12,614 feet) welcomed us back to Colorado. Lone Cone is the western-most major peak in the San Juan Range. It's also Colorado's western-most 12,000-foot mountain.

The summit of 14,150-foot Mount Sneffels (rank #27) is my favorite 14,000-foot peak in Colorado. The peak is almost dead-center in the following pic. The band of snow running off its summit is the upper portion of the Snake Couloir, one of the state's finest snow climbs. The section is hidden from view. I climbed the Snake many, many moons ago and should go climb it again. Here's a link to my Sneffels blog post.

Western Colorado's Ridgway Reservoir (no e in Ridgway) will soon be collecting lots of runoff. 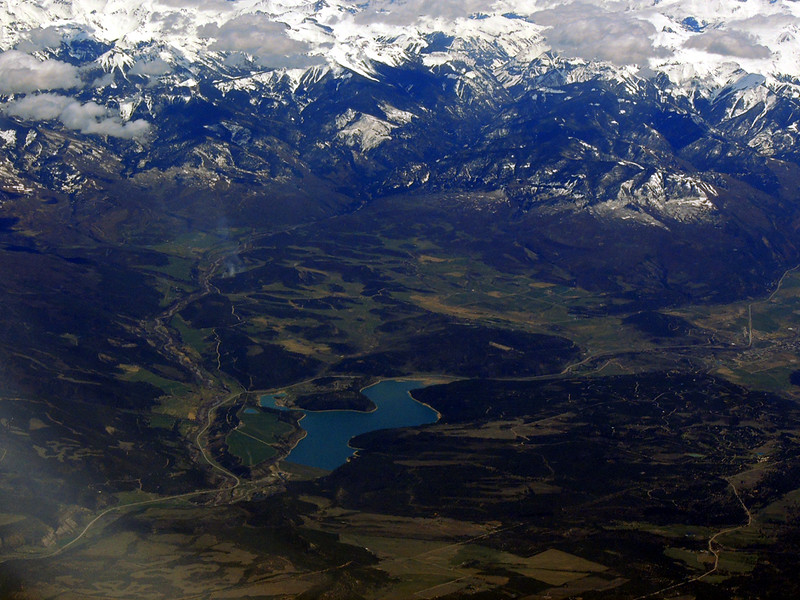 We like to road cycle the Black Canyon of the Gunnison River area. The north rim road is visible.

Blue Mesa Reservoir also is gearing up for the spring runoff.

Here's the southern end of the Sawatch Range. 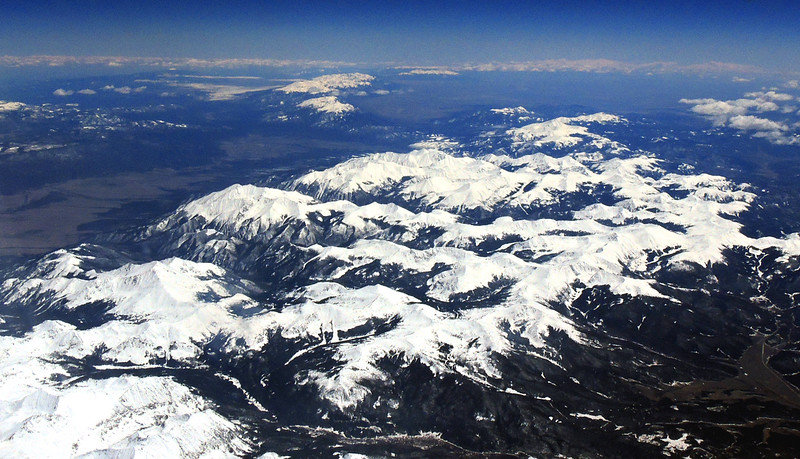 A landmark of the Front Range, Pikes Peak towers to 14,110 feet (rank #30). The peak was named after Zebulon Pike of the Pike Expedition in 1806. In 1893 Katharine Lee Bates wrote America the Beautiful after a visit to the summit and taking in the view.

The great plains of America meet the suburban sprawl of the Front Range.

Parting shot: A race to land.