January Wind Whispers
More delightful January weather recently graced the Front Range. It was time for a road ride south of the metro area in the vicinity of Chatfield Reservoir. Currently, the reservoir has open and iced over water. There were ice fishermen in areas; yet I'm not sure I'd trust the ice with all the freeze-thaw cycles we're getting from the ice gods. 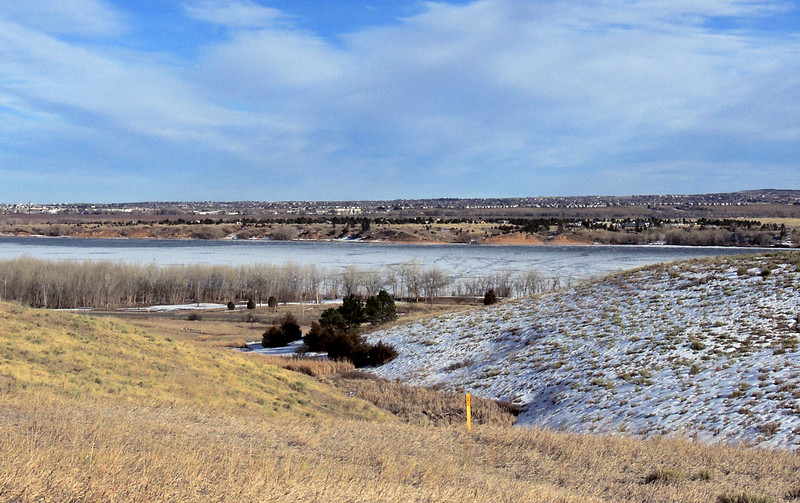 This will be the scene, except when it snows, along the South Platte River for another 3 months. The year will be well into April before most deciduous trees dress in green. 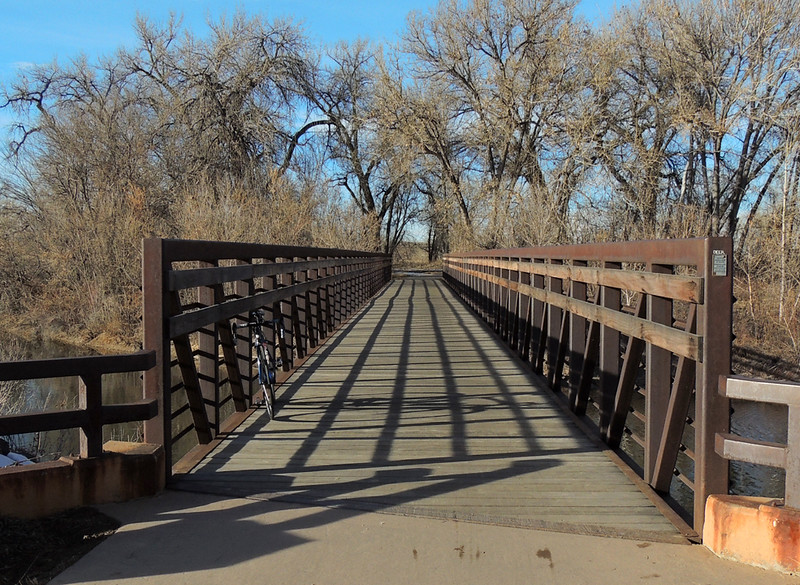 The floodplain of the South Platte River is sprawling in places. Every time I ride through here I picture numerous smoking tepees – tops trailing smoke heavy in scent of hide and wood – of indigenous people telling ancient tales deep into the night. Then, as pre-dawn slowly approaches, they wrap up and sleep through the coldest part of day. I need to invent a time machine.

The long and winding road...

How about some gravel grinding to end the day? I love late-day sun-angles.

That's it for this set. Later gator...

Waterton – Another Episode
We had a few January days warm enough to ride so Snowcatcher, Green Queen, Black Pearl and I took advantage of them. Below are a few pics. It was a bit nippy in the shadows, but not bad. The below pic is an iced-up ephemeral stream. We've had enough snow-melt allowing it to run a bit before freezing over. 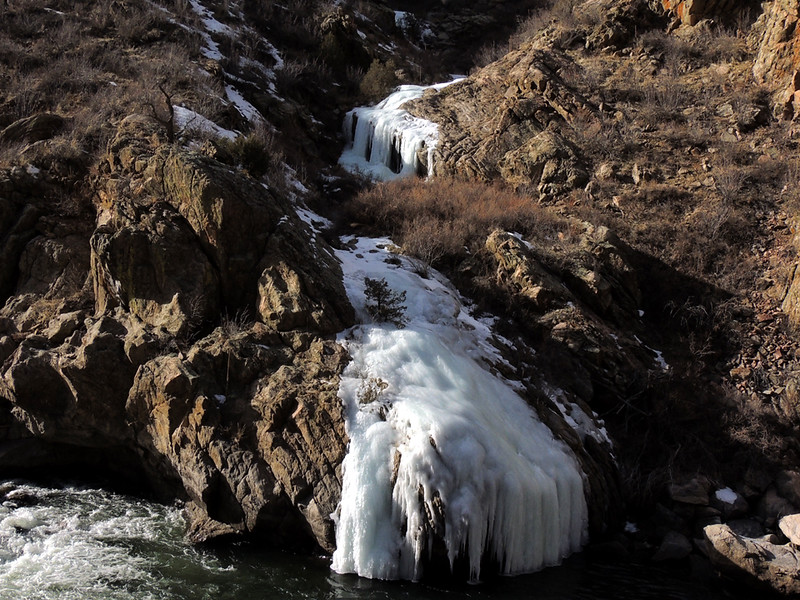 It's a milky web of cold. 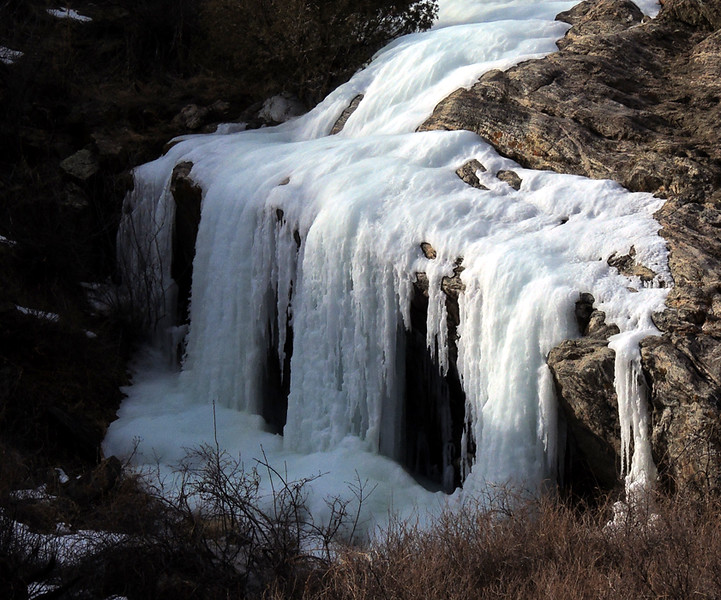 There's a lot of snow on north aspects. South aspects and the road are fairly dry.

Wolfgang and Dieter were at it again.

Mid-channel had thawed a bit over the past several weeks. 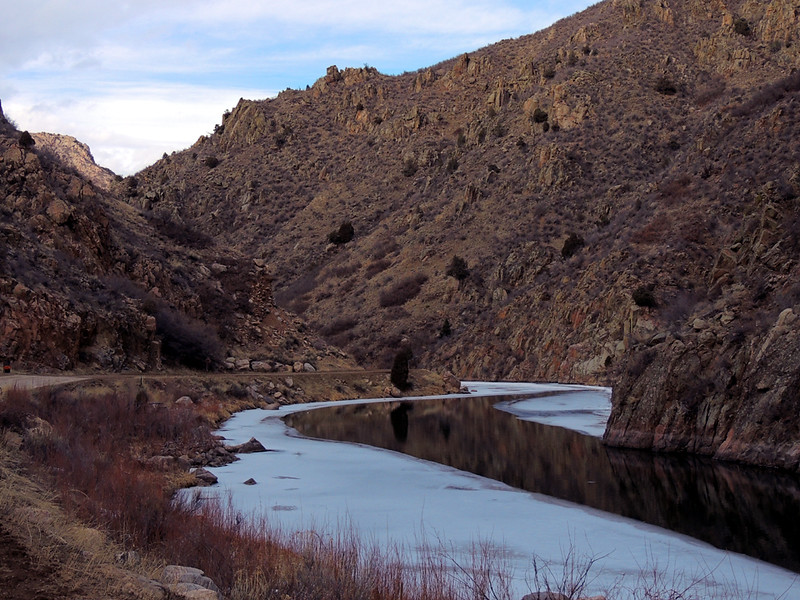 A handful of Ewes were catching rays of warm sun and just eweing around; many will become mothers in two months.

The snow has returned. I'm not sure when I'll get up Waterton again. Soon I hope.

A Nordic Day At Mill Creek
Snowcatcher and I recently visited another area where we like to cross-country ski. Mill Creek is just a handful of miles north of Gunnison, Colorado, in the Ohio Creek Drainage. Mill Creek is a major stream flowing east out of the West Elk Wilderness. The area is known for its dramatic, cliffy ramparts, as well as the highest peak in the West Elk Mountains – West Elk Peak at 13,035 feet (state rank # 617).

Twenty miles to the west found us crossing the southern Sawatch Mountains in heavy snow before dropping into the Gunnison Basin. Note the structure behind the sign. That's a very snowed in, almost covered, visitor center.

About 1.5 hours later, we enjoyed viewing the lower ramparts of Mill Creek; which are silently waiting out the winter.

The Ohio Creek drainage is high, cold and quiet this time of year.

The silence of a sleeping forest can be surreal at times. It's like entering another dimension.

Slowly fading to an eye-pleasing alpenglow, sunlight on 12,544-foot Castle View reminds me how fast time seems to go with age -- another day, lost forever.

So much for the alpenglow, an early evening storm took aim on us. We returned to the car just as the snow picked up in intensity. Time to hit the Jacuzzi! 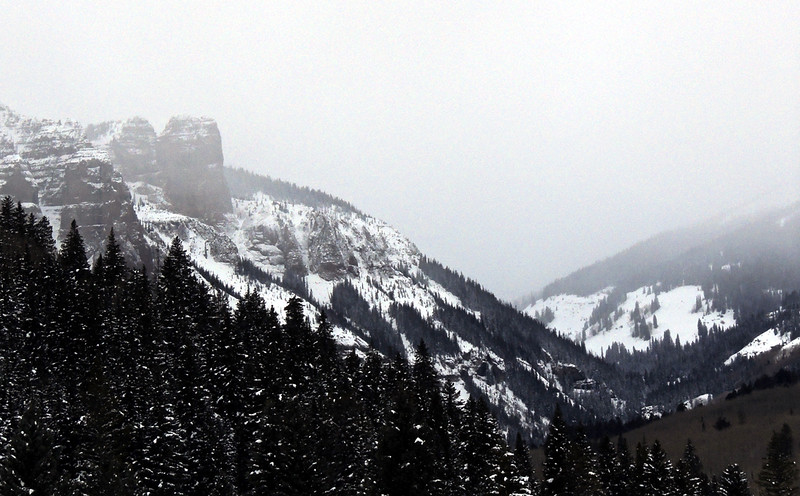 The next morning we began the drive back to the Denver Metro area. However, our first stop would be the Hartman Rocks area to photograph a rustic quilt I had just finished. Hartman Rocks is home to numerous mountain bike races, novice to professional to 24-hour endurance. Moreover, the parking area stop sign seems to get picked on a bit. Just think, each one of those stickers has a tale to tell. 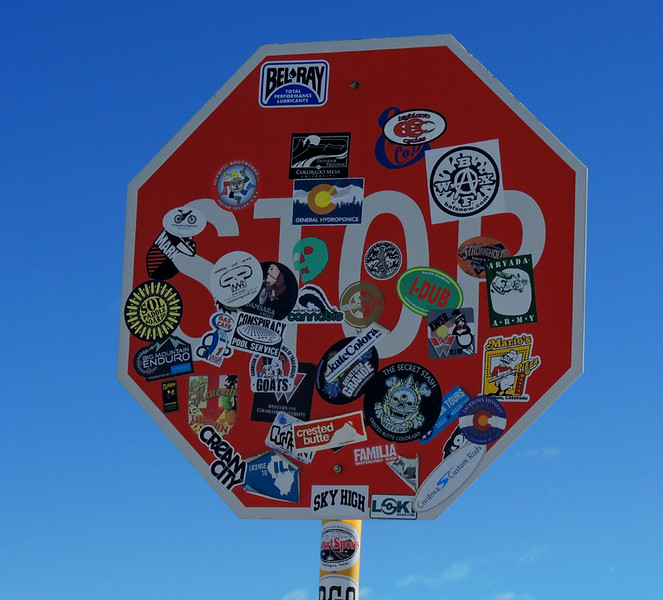 My Ice Queen goes to work on icicles.

Later in the day, after a snow-packed drive over Monarch Pass, we enjoyed clearing weather and seeing some of the Collegiate Peaks (southern Sawatch Range) we've ascended over the years. This Blog's opening pic is 14,197-foot Mount Princeton (state rank # 20). One of Snowcatcher and I's early dates was an ascent of Princeton. The below pic is 14,269-foot Mount Antero (state rank # 10). Regretfully, the actual summit shyly remained hidden in the clouds.

Clouds were lifting off of Mount Yale. This somewhat shy mountain touches the sky at 14,196 feet (state rank # 21). 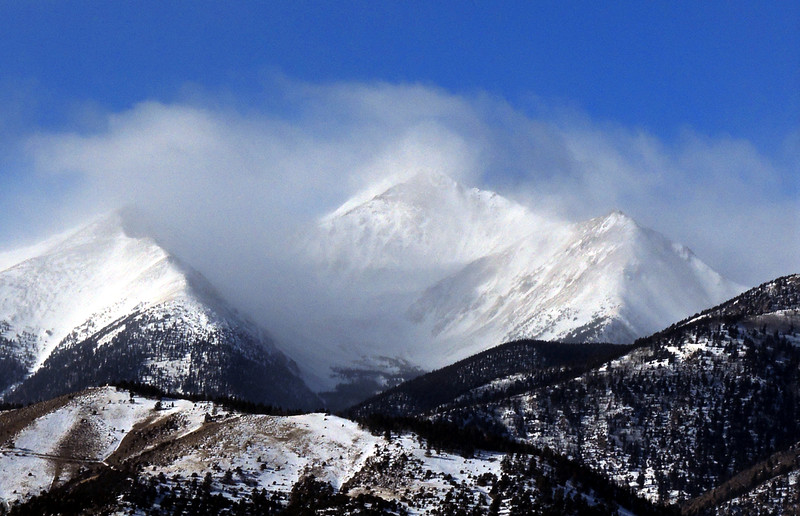 Gentle Mount Columbia rises to 14,073 feet (state rank # 35). Even the clouds look gentle. It's also a very stiff hike. Don't let the rounded curves fool you. Once on top, you will feel like you earned this one; and once you've descended, your knees will hate you! 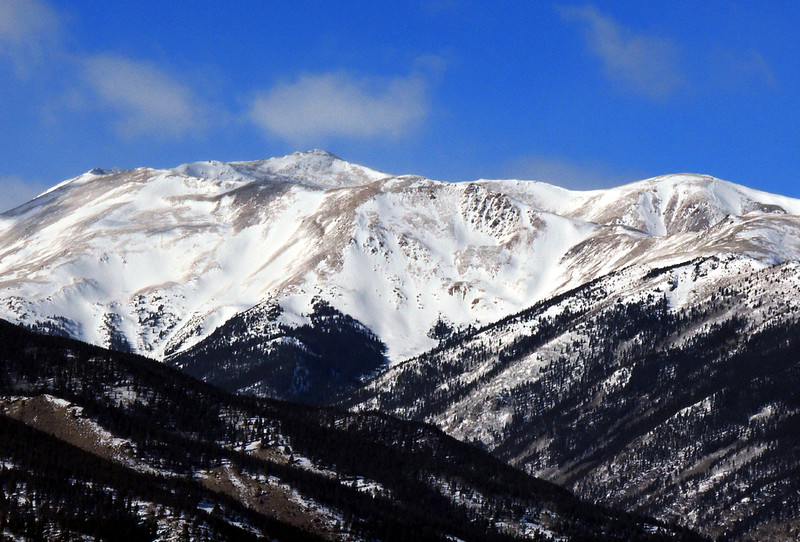 Eventually we made it home. I have more adventure on the docket as we slowly make our way into March, April and spring. I know, I'm pushing the season a bit. 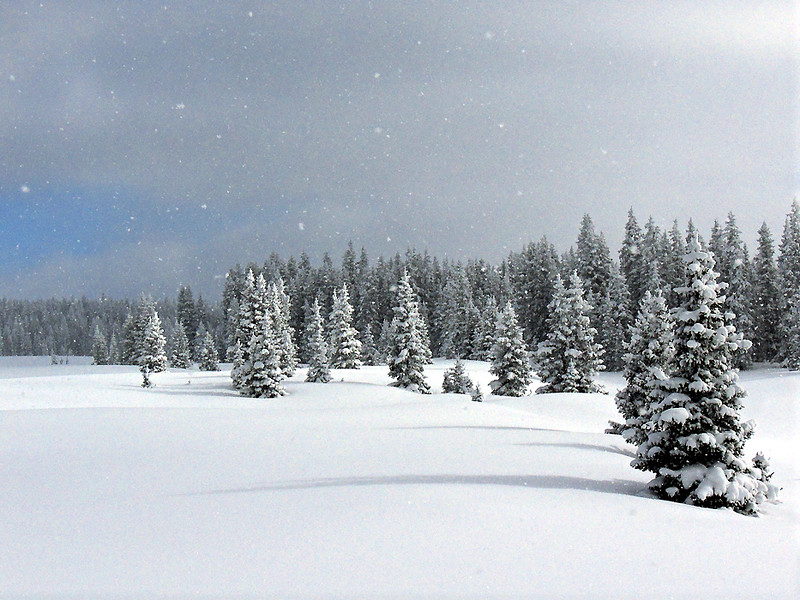 The Grand Mesa Is Quite Grand
My secret cache from the previous post is Grand Mesa. It towers above my home town of Grand Junction, Colorado. It often collects massive amounts of snow, and this may be one of those years. Snow depth during our visit was well over 4 feet.

For Day Two, we journeyed back to the top of Grand Mesa for another round of cross-country skiing. We parked at the Nordic Center at Skyway, which is on the western lip of Grand Mesa. The top is a relatively flat area full of subalpine parks, meadows and lakes dispersed throughout a forest of Engelmann spruce. The Skyway elevation ranges between 10,600 and 10,750 feet.

A person could do some backcountry skiing here, but not too much in the Skyway area, considering it's flat, with no downhill reward for hard skinning up to a summit or ridgeline. Being a Nordic center, most of the trails have been groomed for basic cross-country skiing, skate skiing or classic cross-country skiing in machine-groomed snow tracks. Moreover, you can still ski off-trail if desired.

Grand Mesa is billed as the largest flat-topped mountain in the world. That's a pretty big statement, and I don't know if it's true or not; there are a lot of big mesas around the globe. Moreover, I'm not sure if there's an "official" dividing line between mesa and much larger plateau.

Moons ago Grand Mesa was born from basaltic flow of a shield volcano. Basaltic flows capping Grand Mesa are up to 400 feet thick. The summit area is 800 square miles of rarified air at an average elevation 10,000 feet. Leon Peak is the highest point on Grand Mesa, touching the sky at 11,234 feet. Did I mention lots of fluffy snow? We enjoyed intermittent flurries and sun. Enjoy the pics.

Notice the animal tracks that are afloat over the rolling sub-alpine terrain.

We played hide and seek with the sun all day.

The small clearing might be home to a pond in hiding.

The northern rim of Grand Mesa is in the clouds (pic taken from the 9,600-foot contour).

To the northwest, late afternoon light is washing the flanks of the Roan Plateau. 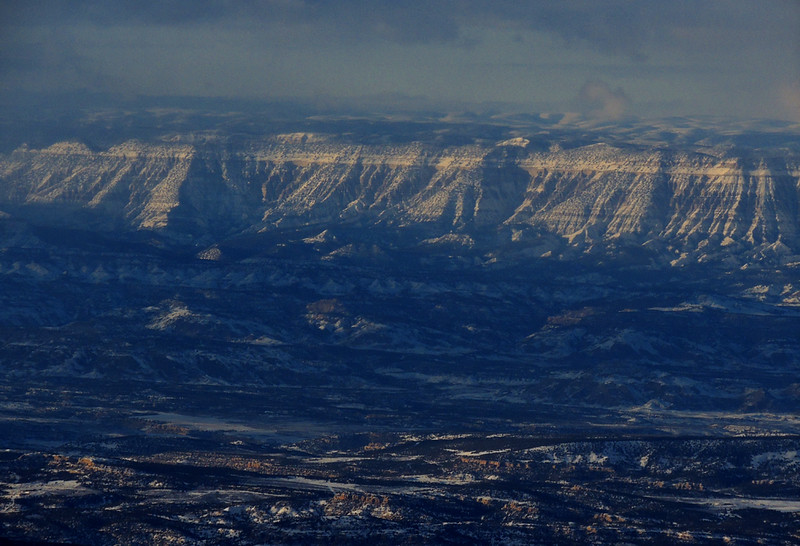 That's it for this set of Grand Mesa pics.
I'm sure I'll find something else to post; stay tuned...
Adios
Posted by Lee Zard at 12:30 AM 1 comment:

Hi folks, here's a short blog of things to come. Snowcatcher and I recently traveled to a favorite cache of snow for some exquisite cross-country skiing. I'm posting several teaser shots from our late-afternoon glissade.

I'm not sure I want to reveal the location of the cache because I'm stingy. But, here's a hint: It's due east 1-hour and about 6,050 feet higher in elevation than the largest city/town in western Colorado. Another hint for readers of this blog; my home town sits due west of the snowy horde of snow.

The Nordic area can receive copious amounts of snow, especially in late winter and early spring. The current snow depth is over 50 inches. It's a veritable winter wonderland. If you've read this far, note that I'll dismiss the secret with the next batch of photos from our second day of skinny-skiing.

Check back in several days... 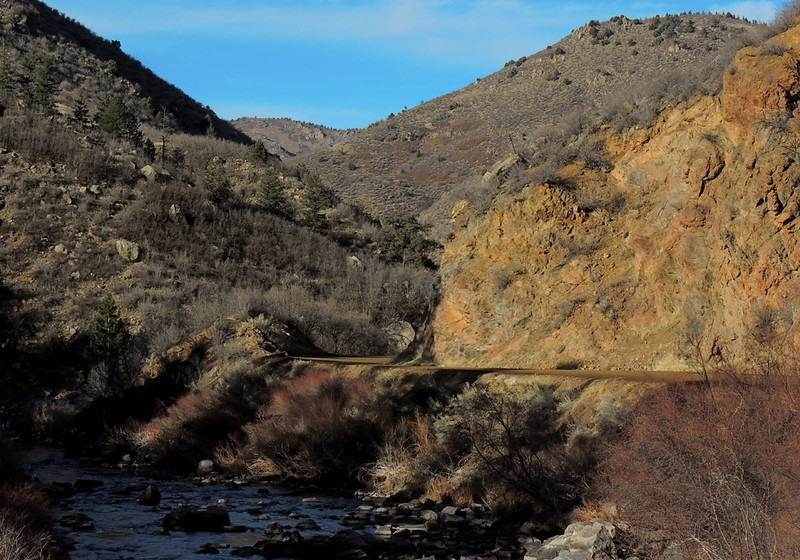 More Waterton Canyon
Yay! I took advantage of another day sporting 40 Fahrenheits. The Black Pearl and I visited Waterton Canyon once again. It felt so good to shed some cabin-fever. On the other hand, we're expecting up to 8 inches of snow over the next several days, with high temps remaining in the 20s through next week. Normality will return; it is winter after all. Nonetheless, I can work on several quilts I have in the making. But for now, perhaps you will enjoy some pics from the ride.


Slack-water areas are completely icing over. This doesn't help the bighorn herd much.

This reach of slack-water is the product of a small diversion dam. The snow-free southerly aspects tend to deny that its winter.

Just below the intersection with the Colorado Trail, the service road ramps-up and is icier than it appears. 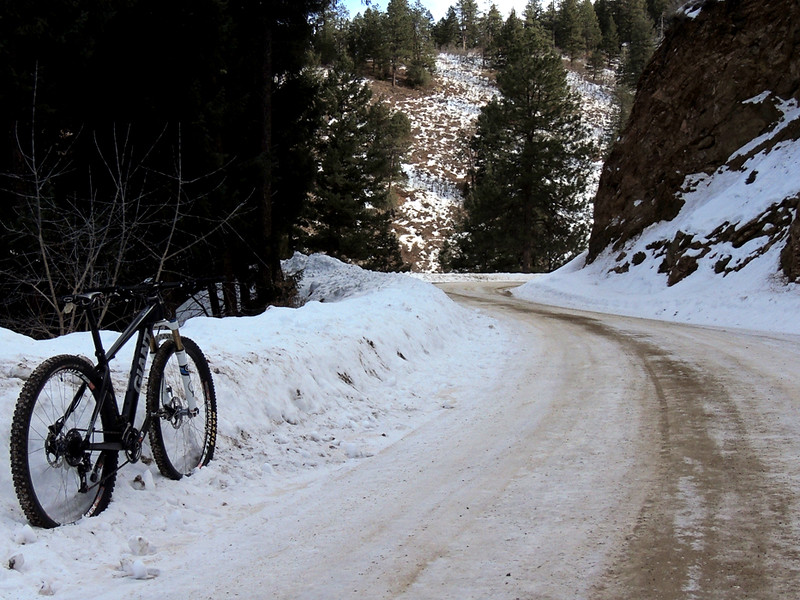 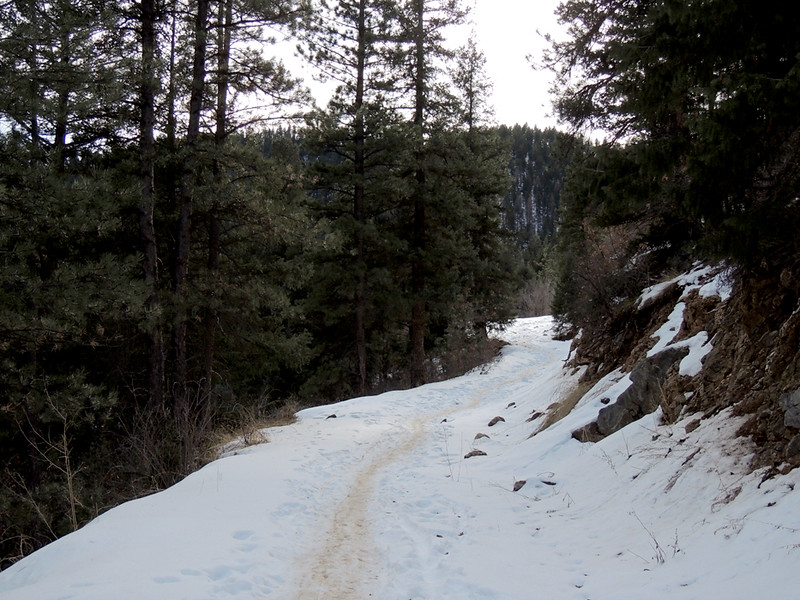 Guess who showed up...

...why it's Dieter and Wolfgang, the self-proclaimed Bavarian bandits.

I have a soft-spot for dormant coniferous trees; patiently they wait out yet another lonely cold season wrapped in coats of needles. 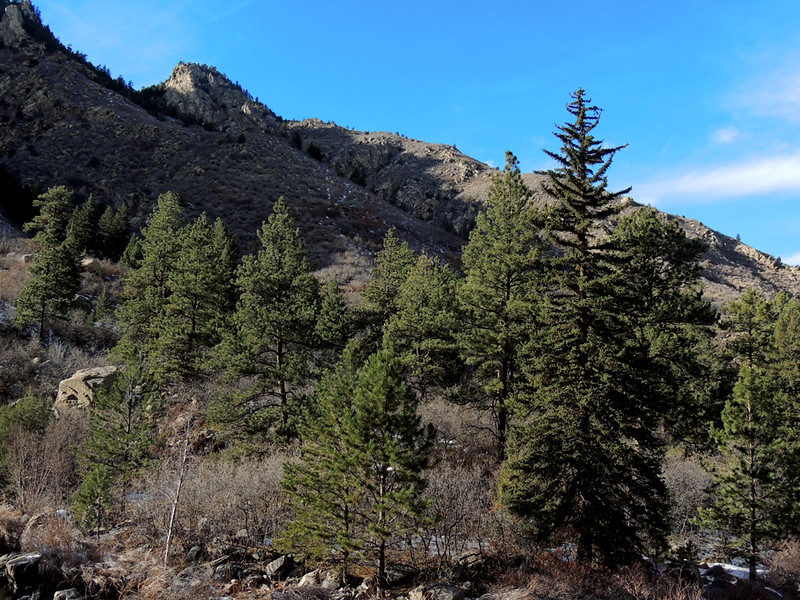 Thanks for reading. More to come, stay tuned!
Adios
Posted by Lee Zard at 12:30 AM 1 comment: