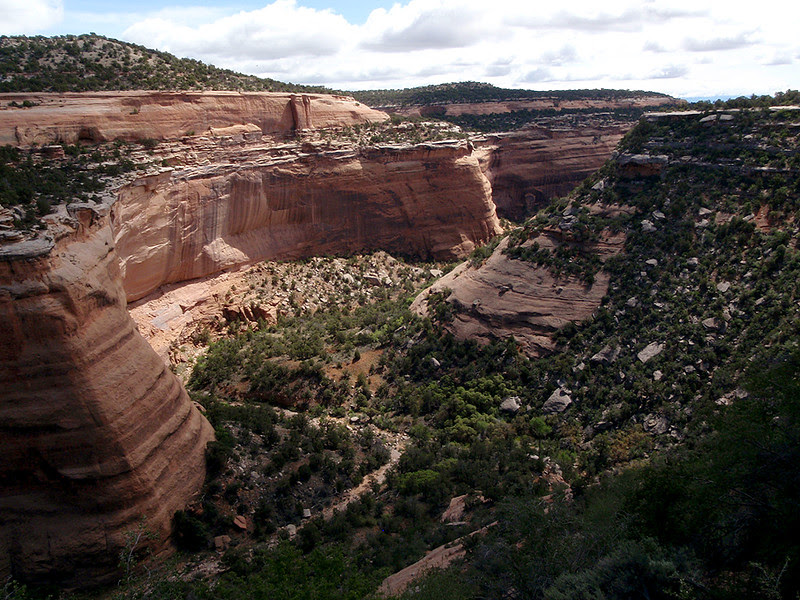 Colorado National Monument
What do you do when the forecast is 5 to 8 inches of heavy, wet, May snow? Why, you head west to the land of high mesas, volcanic plateaus, multi-colored sandstone, Butch Cassidy, Doc Holliday and myriad other colorful history. I'm very biased toward the west side of Colorado. I grew up there. I miss living there. You don't feel like a bazillion people are crowding you as you do along Colorado's Front Range (Fort Collins, Denver Metro, Colorado Springs corridor).

Being quite opinionated, I think one of the best road bike rides in the state is Rim Rock Drive through Colorado National Monument. On the other hand, I've yet to meet a cyclist who didn't like the Monument. Hence, I didn't have to twist Snowcatcher's arm much. Since there were no scheduled Friday night spinster dances to maraud, Dieter and Wolfgang, the Bavarian bandits, came along as well.

Hair on fire, we tore into the Friday night. After 4.5 hours of snow and sheet rain we rolled into Grand Junction. Saturday's weather was iffy. Since Rim Rock Drive isn't a good area to dodge lightning, I sagged Snowcatcher's ride just in case Zeus made an appearance. After the ride, we did the Mother's Day thingie with my folks. The following Sunday was almost perfect! 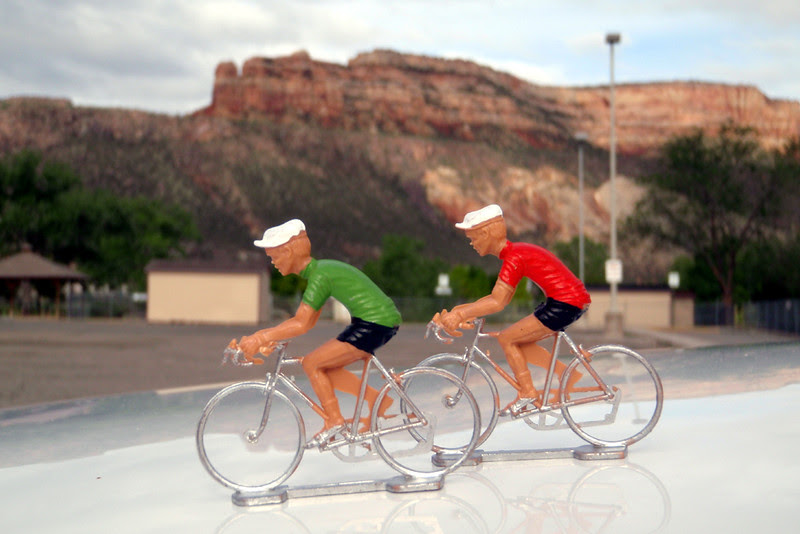 The Colorado National Monument calls home the northern edge of the Colorado Plateau. We began our ride at Wingate Elementary School, at the base of the Monument, close to the Park's east entrance. As we began our ride, Wolfgang and Dieter eyed the climb up Rim Rock Drive. The route would take us through 2-billion year old Precambrian rock, a geologic unconformity (eroded, discontinuous and unknown geologic record), 200 + million year old Triassic sandstone (Chinle, Wingate, and Kayenta formations), 150 + million-year-old Jurassic sandstone (Entrada formation) and mudstone/shale (Morrison formation). 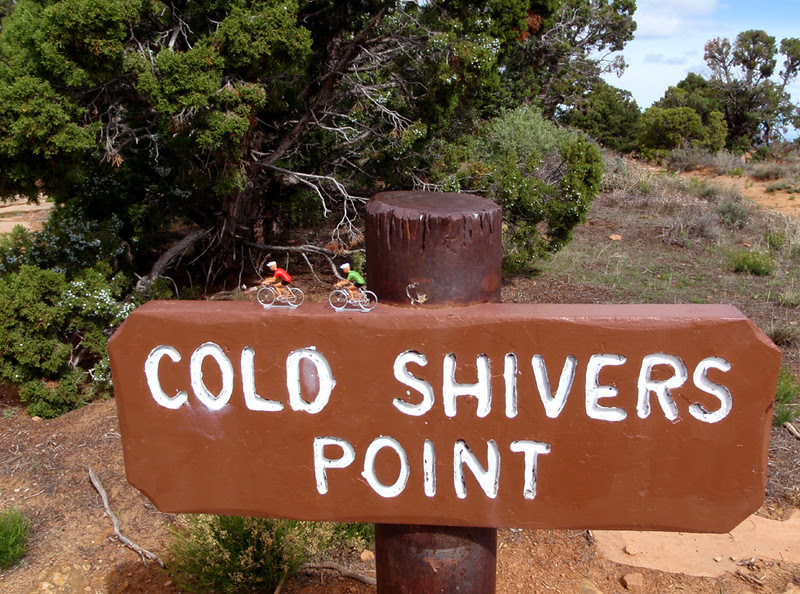 Once in the park, we immediately begin climbing about 1,200 vertical feet at a maximum grade of 8 percent. 4 miles later we reached Cold Shivers Point. Although more climbing was to come, the steep stuff was finished. It's fun to keep track of the clock while climbing to Cold Shivers Point. It took me 23 minutes to get up the beast this trip. My best time is 20 minutes. The quickest time I'm aware of is very fast – 15 minutes. 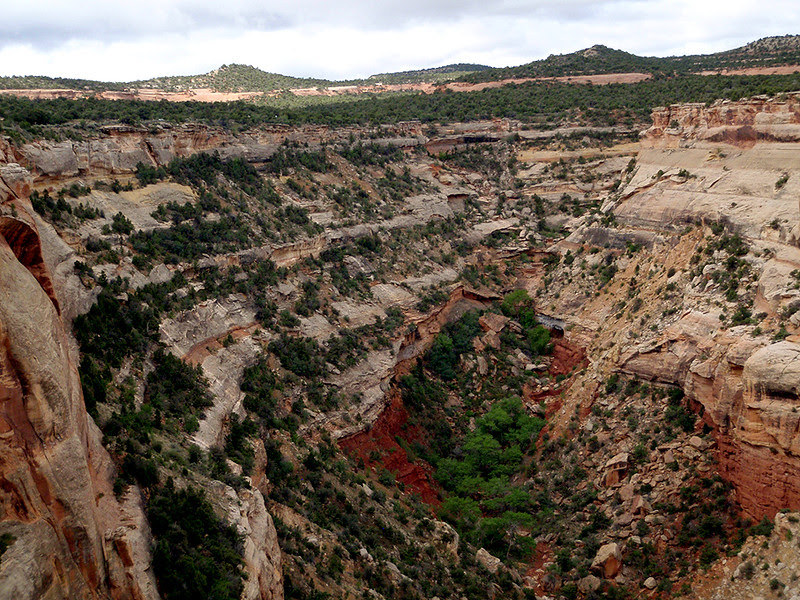 Columbus Canyon is sporting some new green in the bottom. Small springs dot the area, and some small riparian areas are scattered about. 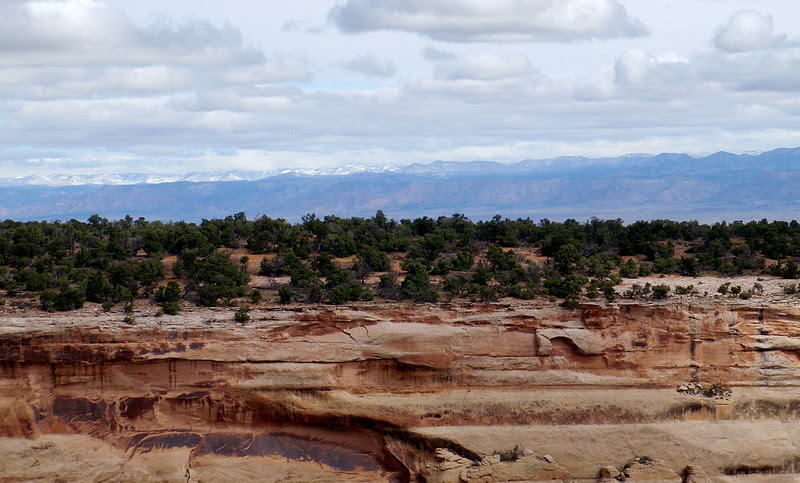 Fresh snow covered higher elevations in the vicinity of the Colorado/Utah state line. 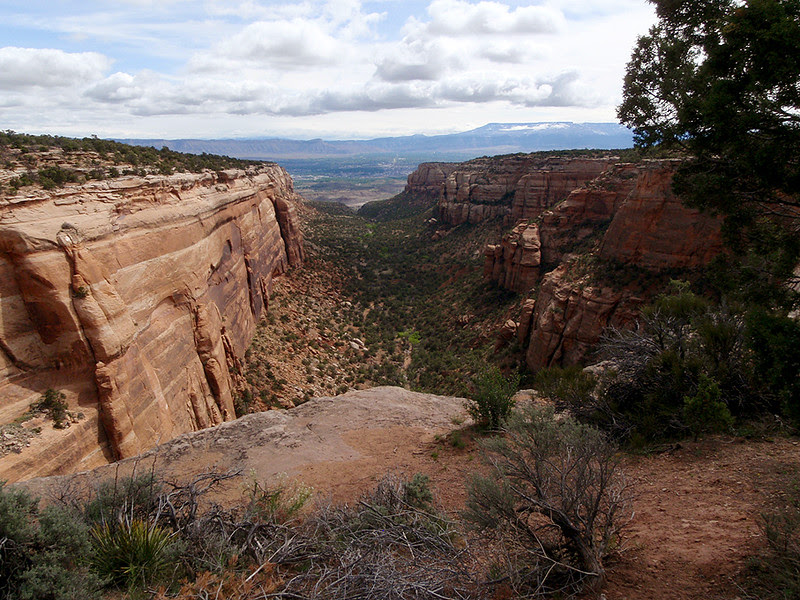 Once on top, Rim Rock Drive is a sinuous drive along canyon rims. Grand Junction, as seen from upper Red Canyon, sits at the base of the Park. The small protrusion in the ridge behind Grand Junction is Mount Garfield. If you visit the backside of Mount Garfield, or anywhere along the long ridgeline known as the Bookcliffs, you have a very good chance of encountering wild horses. The high flattop mountain in the right background is Grand Mesa, rising over 10,000 feet in elevation. 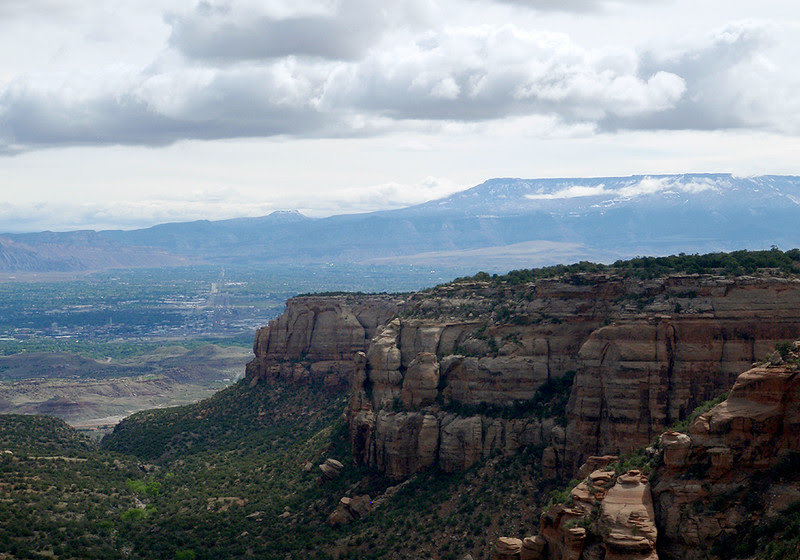 Here's another view down Red Canyon into the heart of Grand Junction. Mount Garfield is out of view to the left. Grand Mesa will play host to day two of Ride the Rockies. Riders will ride about 100 miles to Hotchkiss, Colorado. However, riders will have to scale Grand Mesa first. The climb is 5,000 feet of elevation gain over 20 miles. Grand Mesa, by most accounts, is considered the third hardest mountain pass to ride over in the state. I've ridden it a handful of times, and it hurts. 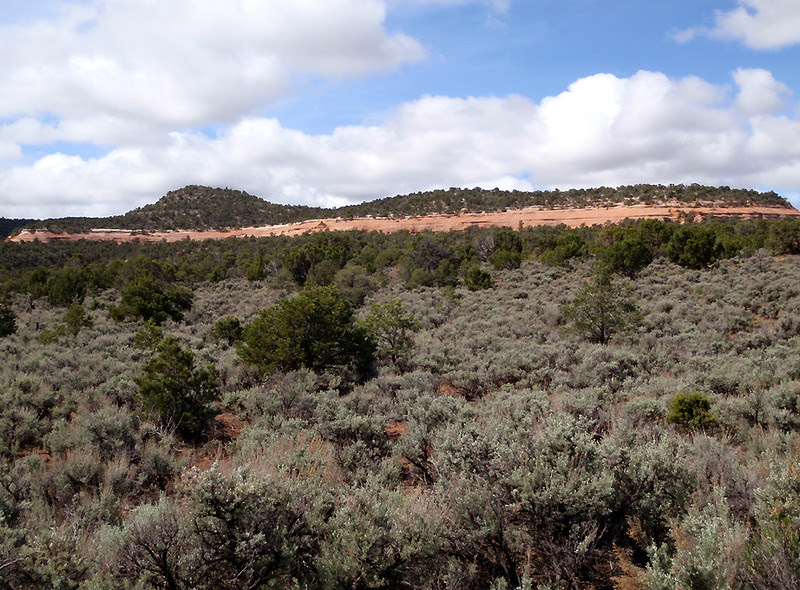 Take a big breath! Can you smell the sage? There has been a lot of rain and snow, and the scent of sage weighs heavily. This is a Piñon-Juniper ecosystem, providing wildlife forage and domestic grazing. Similar landscapes may be found in New Mexico and Utah. 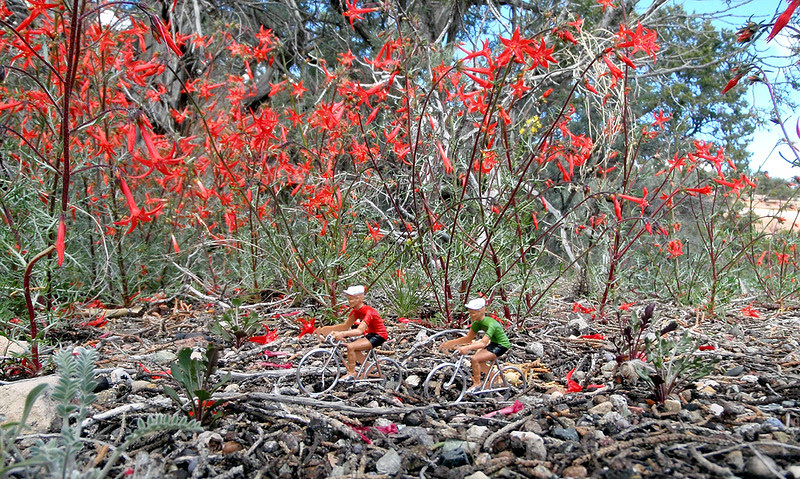 Wolfgang and Dieter are into herbs. Here they've found a grove of Scarlet Gilia (Ipomopsis aggregata ssp. formosissima). This flower is a member of the Phlox family and is biennial. During year 1, food is stored in the taproot. For year 2, the stored food is used for fast growth and to reproduce. This is a very prolific flower in western Colorado. 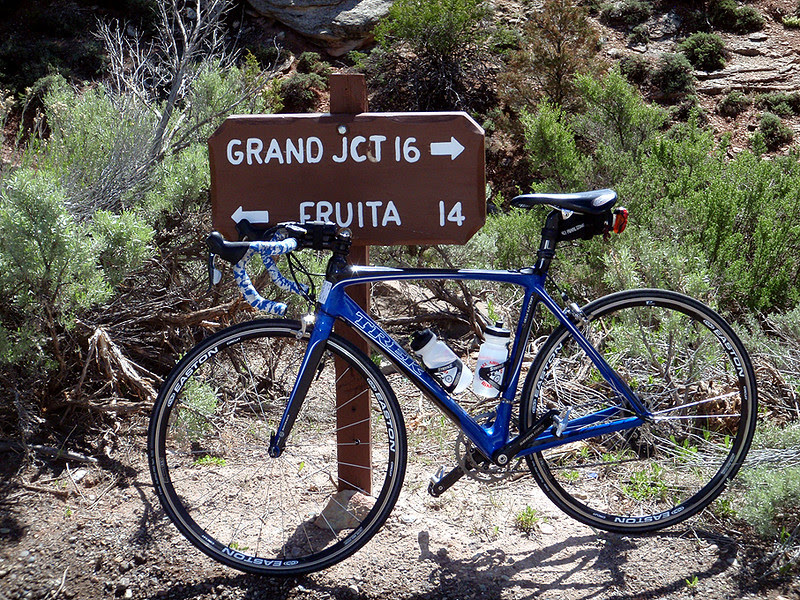 At the sign, we're more or less halfway along Rim Rock Drive. There is one more little climb, followed by all downhill. There also is a third road taking off from here into the ranch and graze lands of Glade Park and Piñon Mesa. The high summer pastures of Piñon Mesa offer a nice temperature retreat when Grand Junction temps are triple digit. 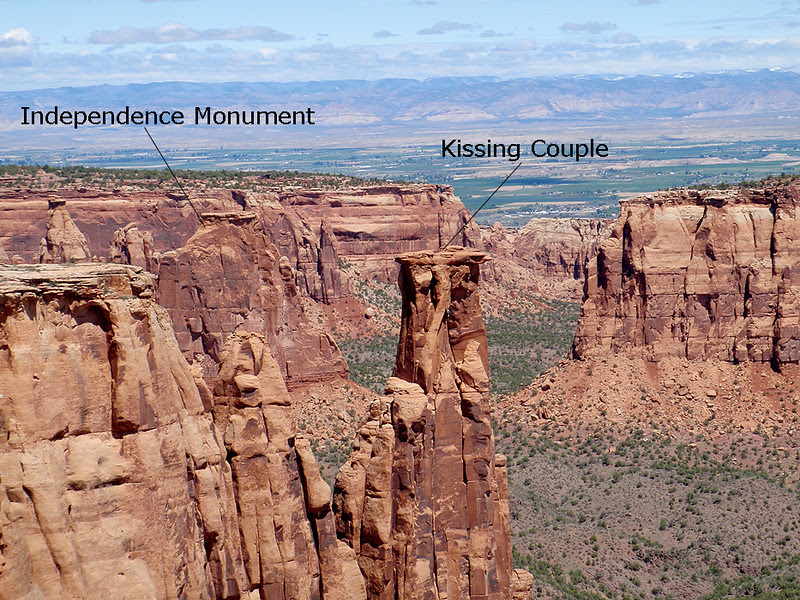 The lower portion of Monument Canyon is shown in the above photo. There are numerous difficult towers to test aid and free-climbing skills. Two popular towers are Kissing Couple and Independence Monument. 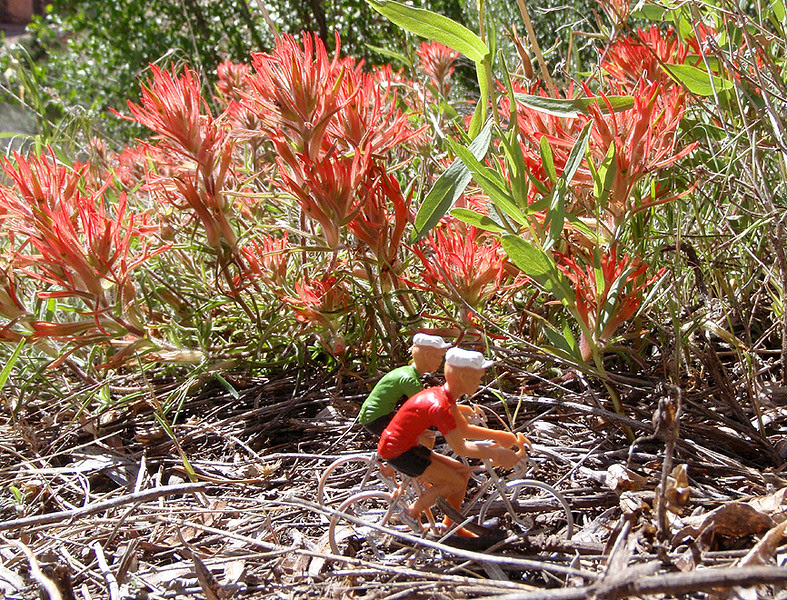 The herb masters are at it again. They've discovered a stand of red Indian Paintbrush (Castilleja miniata). These flowers are members of the Figwort family and also are found in rose (pinkish) and yellow. 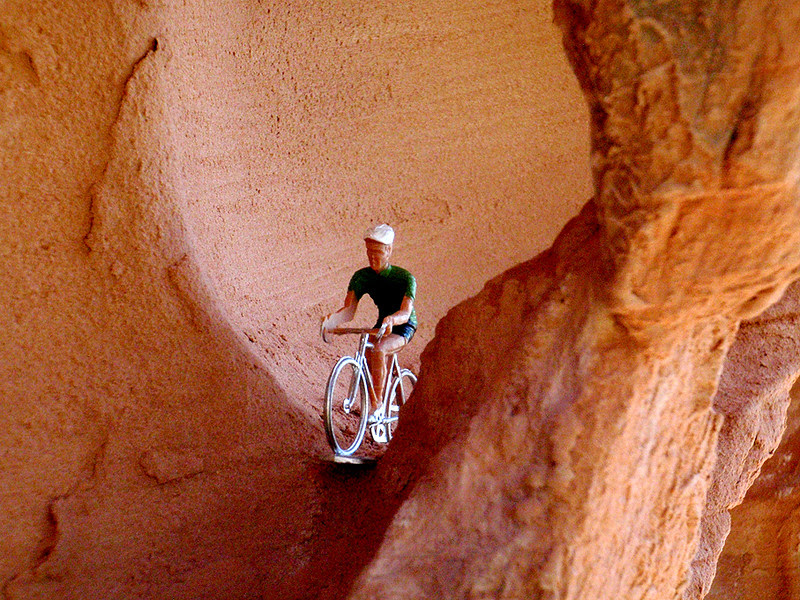 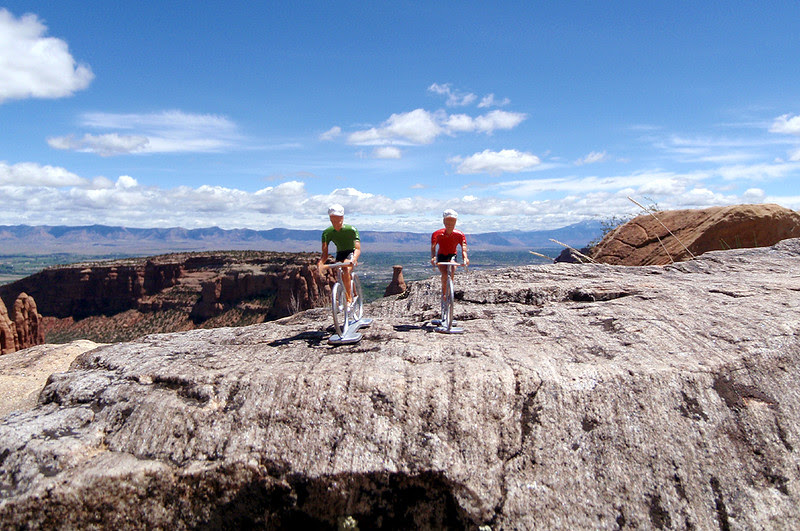 The Bavarians are ready for their big descent. 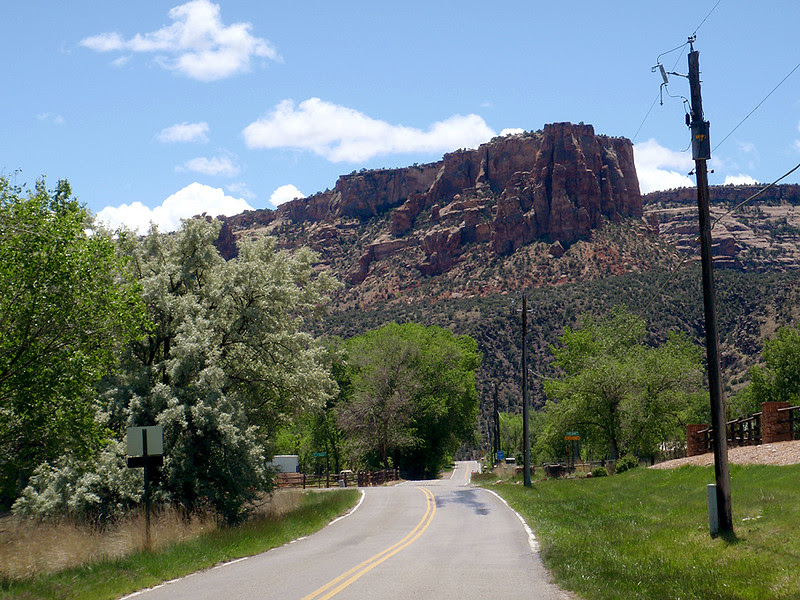 Our route back took us along the base of the Monument. Even the return was geologic as we paralleled the Redlands fault line. Earlier I spoke of a geologic unconformity. It can be somewhat seen here. Notice where the black rock meets the dark red - that's it. Several hundred million years of geologic information is missing between the black Precambrian formation (several billion years old) and the red Triassic Chinle formation (200 + million years old).